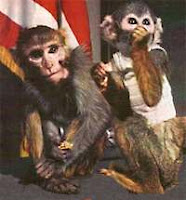 On this day in ...
... 1959 (50 years ago today) , 2 females became "the first living creatures to survive a space flight." Both were monkeys -- Able, a 7-pound rhesus monkey, and Baker, a 1-pound squirrel monkey (left). (photo credit) They traveled at speeds of up to 10,000 mph during a flight that sent them 300 miles into space in a Jupiter missile. It began at Florida's Cape Canaveral and and ended 15 minutes later in

the Atlantic Ocean near Puerto Rico. Another female, a dog named Laika, had died during a 1957 flight launched by the Soviet Union (right). (credit for photo of Bulgarian stamp)

... 1964 (45 years ago today), at a meeting held by the Palestinian National Congress at the Inter-Continental Hotel in Jerusalem, the Palestinian Liberation Organization was formed. (image credit)