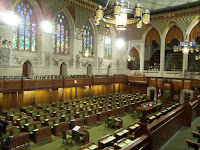 On this day in ...
... 1990, Canada's House of Commons (right) passed Bill C-43, new abortion legislation, by a vote of 140 to 131. (photo credit) The bill, which continued the criminal proscription of abortion but allowed exceptions from that prohibition " as long as a doctor believes the physical or mental health of the woman is endangered," was sent to Canada's Senate for debate. There it would fail by a tie vote in 1991. 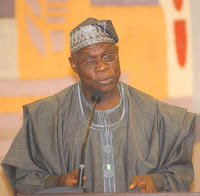 ... 1999 (10 years ago today), Olusegun Obasanjo (left) was sworn in as President of Nigeria following his election, bringing an end to 15 "years of adventurism and brigandage under military rule," as The Nation put it. (photo credit) The 8-year tenure of Obasanjo, who himself had been a military ruler of Nigeria from 1976 to 1979, was marred by charges of corruption and repression. Last December Obasanjo was appointed the U.N. Special Envoy on the Great Lakes Region, tasked to aid "dialogue between the leaders of Democratic Republic of Congo and Rwanda," by Secretary-General Ban Ki-moon.