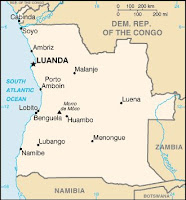 On this day in ...
... 1991, at the Portuguese Foreign Ministry in Lisbon, an accord ending 16 years of civil war in Angola was signed by the country's President, Jose Eduardo dos Santos, and Jonas Savimbi, leader of the rebel National Union for the Total Independence of Angola, known by its acronym UNITA. The New York Times reported that the signing "fits in with ... efforts to resolve regional rivalries" of the Soviet Union, which had supported Angola's government, and the United States, 1 of 2 countries from which "rebels took their aid and their cue." The other, according to The Times, was South Africa.

... 1971, Sandra Ellen Oxner, who'd received LL.B and LL.M degrees from Dalhousie Law School in Halifax, was appointed a judge of the Nova Scotia Magistrate's Court. Then 29 years of age, she became the 1st woman to be appointed to the judiciary in that Canadian Province. She's the founding Chair of a nongovernmental organization located at Dalhousie, the Commonwealth Judicial Education Institute, which provides educational programs for members of courts and tribunals. She's also a consultant on judicial education and reform in places as varied as Ukraine, Russia, Yemen, West Bank Gaza, Uganda, Sierra Leone, Trinidad, and Bangladesh.