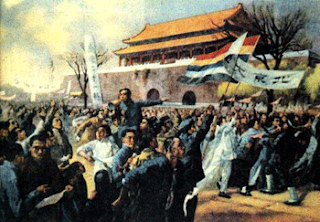 On this day in ...
... 1919 (90 years ago today), "massive popular protest ... took place in China ... following the announcement of the terms of the Versailles Treaty," which, as we've posted, ceded territories on China's mainland that formerly had been held by Germany to Japan rather than returning them to China. The 1919 protests (left) exemplified what came to be called China's "May 4th Movement," or "new culture" movement, which emerged a few years earlier out of discontent with the failure of efforts in 1911 to set up a republican government. (image credit) This website maintains:

Its importance equals if not surpasses the more commonly known political revolutions of the century. The movement articulated the contempt for traditional Chinese culture felt by many Chinese intellectuals. These intellectuals blamed traditional culture for the dramatic and rapid fall of China into a subordinate international position, and maintained that China's cultural values prevented China from matching the industrial and military development of Japan and the West. ... The way out of China's problems, many believed, was to adopt Western notions of equality and democracy and to abandon the Confucian approach which stressed hierarchy in relationships and obedience. Science and democracy became the code words of the day. 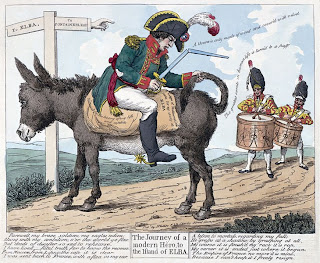 ... 1814 (195 years ago today), the 45-year-old former French Emperor, Napoleon I, began an exile on Elba in accordance with the 1814 Treaty of Fontainebleau. He began his stay on the Italian island (pop. 12,000) by entering its capital city, Portoferraio, and declaring, "I want to live from now on like a justice of the peace." Within a year he would return to the European mainland to try to reclaim his prior empire. (credit for 1814 political cartoon)