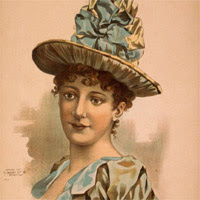 On this day in ...
... 1809 (200 years ago today), inventor Mary Dixon Kies became the 1st woman to receive a U.S. patent. Kies patented a method of weaving straw with silk, which enabled her to make hats like that at right. Though conceivable since passage of the Patent Act of 1790, this had not been achieved by women, according to the Library of Congress, "because in many states women could not legally own property independent of their husbands," so that "many women inventors didn't bother to patent their new inventions." "Today," it is written, "hundreds of thousands of women apply for and receive U.S. patents every year, with more than 12 percent of all patent applications including a woman inventor."

... 1955, occupiers withdrew from the western part of what once had been a single country, thus establishing the sovereign state of the Federal Republic of Germany (left). "The end of the Allied occupation of West Germany meant a full recognition of the republic as a member of the western alliance against the Soviet Union." Reunification of Germany's 2 parts would not occur until 1990.

Most of the involved patents are being used in everyday life and work of women such as clothing, household implements, fireplaces and cook stoves. So glad, we are now enjoying this things.