On this day in ...
... 1877, less than a year after he helped to destroy the 7th Cavalry at Little Bighorn, Montana, Lakota Chief Crazy Horse surrendered to U.S. troops at the Red Cloud Agency in Nebraska. According to a Public Broadcasting Service website, "constant military harassment and the decline of the buffalo population eventually forced" him and his band to give up. Crazy Horse (right) would be killed by bayonet 4 months later. 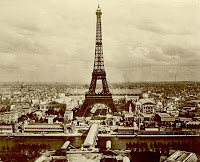 ... 1889 (120 years ago today), in Paris, France, a World's Fair known as l'Exposition universelle opened for a 6-month run. The only attraction still standing is among the best known from any fair: the 300-meter Eiffel Tower, which was opened to the public within 2 weeks of this inauguration date.