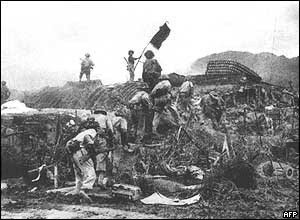 On this day in ...
... 1954 (55 years ago today), Viet Minh troops overrun Dien Bien Phu, the capital of the northern Vietnam province of the same name. The victory marked the end not only of a nearly 2-month battle against French troops, but also of French colonial rule in Indochina. (credit for Agence France-Presse photo of Viet Minh troops raising flag after 1954 victory) 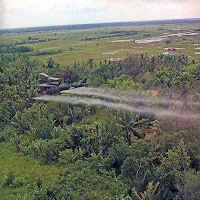 ... 1984 (25 years ago today), at the U.S. District Court in Brooklyn, a "long-scheduled" class action trial was avoided when 7 manufacturers of Agent Orange agreed "to create a $180 million fund for thousands of Vietnam veterans and their families who said the herbicide had harmed them." Agent Orange-related medical problems continue to be addressed by U.S. veterans agencies, as is evident here. (credit for photo of U.S. helicopter spraying Agent Orange herbicide/defoliant over Mekong Delta jungle)