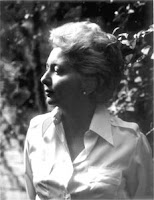 ... 1932, Julieta Campos (right) was born in Havana, Cuba. (photo credit) In the 1950s she would move to Mexico after marrying a diplomat from that country, and 2 decades later would win a top literary prize for her novel, Tiene los cabellos rojizos y se llama Sabina (1974), which translates as "Her hair is red and her name is Sabina." Among her works available in English is The Fear of Losing Eurydice (1994). Campos, who led Mexico's chapter of PEN from 1978 to 1982, died from cancer in 2007 in Mexico City.

... 1984 (25 years ago today), the Soviet Union announced that it would boycott the Summer Olympics set to begin on July 28 in Los Angeles, California. The move, which would be joined by more than a dozen member states of the Soviet bloc, came after the United States had boycotted the last summer games, held in Moscow in 1980.