Military commissions have a long tradition in the United States. They are appropriate for trying enemies who violate the laws of war, provided that they are 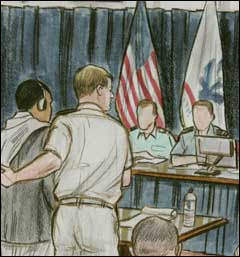 properly structured and administered. In the past, I have supported the use of military commissions as one avenue to try detainees, in addition to prosecution in Article III courts. In 2006, I voted in favor of the use of military commissions. But I objected strongly to the Military Commissions Act that was drafted by the Bush Administration and passed by Congress because it failed to establish a legitimate legal framework and undermined our capability to ensure swift and certain justice against those detainees that we were holding at the time. Indeed, the system of Military Commissions at Guantanamo Bay had only succeeded in prosecuting three suspected terrorists in more than seven years.
Today, the Department of Defense will be seeking additional continuances in several pending military commission proceedings. We will seek more time to allow us time to reform the military commission process. The Secretary of Defense will notify the Congress of several changes to the rules governing the commissions. The rule changes will ensure that: First, statements that have been obtained from detainees using cruel, inhuman and degrading interrogation methods will no longer be admitted as evidence at trial. Second, the use of hearsay will be limited, so that the burden will no longer be on the party who objects to hearsay to disprove its reliability. Third, the accused will have greater latitude in selecting their counsel. Fourth, basic protections will be provided for those who refuse to testify. And fifth, military commission judges may establish the jurisdiction of their own courts.
These reforms will begin to restore the Commissions as a legitimate forum for prosecution, while bringing them in line with the rule of law. In addition, we will work with the Congress on additional reforms that will permit commissions to prosecute terrorists effectively and be an avenue, along with federal prosecutions in Article III courts, for administering justice. This is the best way to protect our country, while upholding our deeply held values.

(image credit)
Sure to draw fire, the decision provokes these initial thoughts:
Military commissions are not per se illegal. The United States has resorted to them on occasion since the days of its Revolutionary War against England. Nor does international law contain any blanket prohibition on such tribunals.
Yet tribunals of exception give rise to concern, under the laws of the United States no less than under international law, for reasons like these:
► Such tribunals tend to be set up in times of crisis, when there exists a perceived need to deny certain rights to the accused.
► Frequently, denial of rights occurs at a time when some in the society maintain that the particular accused do not deserve all the rights required under ordinary law.
► Whereas the ordinary criminal justice system has been tested over time -- has learned to accommodate the rights of the accused and the demands of public safety -- the fact that the tribunal of exception is an untried system makes it inevitable that unanticipated difficulties will occur, thus requiring improvised responses that themselves may give rise to new difficulties.
This combination of factors enhances the risk of miscarriage of justice. The point was made, to cite one example, by those Justices who dissented from the Supreme Court's decision in In re Yamashita (1946), which upheld the capital conviction by military commission of a former Japanese general.
Many of these risk-of-miscarriage factors, moreover, have been evident at the GTMO commissions:
► President George W. Bush ordered them established fewer than 2 months after the terrorist attacks of September 11, 2001, in a Presidential military order that asserted, without demonstrating, that due process corners had to be cut.
► Abandoning any presumption of innocence, administration officials and many others made clear their view that in any event these defendants deserved few rights. To quote an example at page 268 of my 2004 article, Guantánamo:

Vice President Dick Cheney elaborated, saying that the detainees "'don’t deserve the same guarantees and safeguards that would be used for an American citizen going through the normal judicial process.'"

► A glaring example of the inherent deficiency of untried systems occurred at the pretrial hearing in Khalid Sheikh Mohammed et al. that I attended last December at Guantánamo. (Prior posts here, here, and here.) As I related in an op-ed published that week, defendants, charged with responsibility for 9/11, told the judge they wanted to "confess." But proceedings had to be continued when it became clear that no one -- not the judge, not the lawyers, and surely not the defendants -- knew whether someone charged with a capital crime may plead guilty before the military commission and still face the death penalty. The question remains open today, fully 8-1/2 years since President Bush ordered establishment of the commissions.
President Obama's statement promises to avoid risks of miscarriage of justice, primarily by increasing the rights conferred upon detainee-defendants. The 5 reforms listed in the statement are moves in the right direction, though the degree to which the new commissions meet prevailing due process standards cannot be assessed properly till the new rules are published.
Surely deserving particular praise is reform No. 1. It appears to conform evidentiary practice in the military commissions to prevailing legal standards; that is, to ban from trial statements obtained from detainees not only by torture per se, but also by interrogation methods that, though they fall may not qualify as torture, are nonetheless cruel, inhuman or degrading. Omission of such statements eliminates a category of proof that was both legally objectionable and objectively unreliable.
It seems far better to resolve the 20 or so cases reportedly destined for trial at Guantánamo by fair commissions, moreover, than to establish, just because of 20 hard cases, a permanent National Security Court.
Even so:
That this statement initiates yet another retooling of a demonstrably flawed system means that the risks of missteps, of unintended consequences, again has been increased. That fact, coupled with the decision to continue proceedings at a remote location inaccessible to all but a few, no doubt will compromise claims of fairness and legitimacy of these trials.
by Diane Marie Amann at 6:01 AM