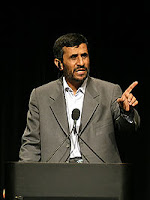 IntLawGrrl Hope Lewis is right in her post below: not quite 'Nuff Said about what's happening in Iran. Not only because, as she says, the fundamental issue is the right of the Iranians to freedom of expression, association, political opinion, etc., but because the right to self-determination means being able to choose one's leaders without outside interference, as well as without fraud. So I'm wondering to what extent the media may be considered to interfere, and to what extent the events in Iran are a result of media and the power of modern commication technology.
I'm wondering this because here in Paris, I have met Iranian women who contradict the image we outside Iran have all been given of what it's like on the inside. They urge people to visit, and a young French woman's story confirms a greater openness and freedom than we believe prevails: traveling through the Middle East alone in her truck with her dog, she became slightly annoyed with the overwhelming kindness and generosity of the Iranians because she was never alone: constantly in someone's enjoyable company, always the very welcome guest. If we who oppose the imposition of the veil cover our heads to visit Iran and Iranians starved for outside contact, are we capitulating? Supporting the regime, or supporting the people? 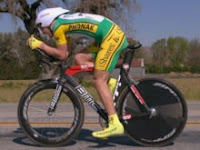 With these questions in mind, I listened to the news on the eve of the Iranian election and heard there was a good chance President Mahmoud Ahmadinejad (above left) would not be reelected. Then, just like Floyd Landis (right) blowing past the opposition to win the 2006 Tour de France after having fallen hopelessly behind (or so it seemed), he was announced the landslide winner. My husband and I joked about doping and were not surprised to hear accusations of fraud. Intriguing, then, to read in Ken Ballen's and Patrick Doherty's Washington Post article that

our nationwide public opinion survey of Iranians three weeks before the vote showed Ahmadinejad leading by a more than 2 to 1 margin -- greater than his actual apparent margin of victory in Friday's election. ...

Iranians view their support for a more democratic system, with normal relations with the United States, as consonant with their support for Ahmadinejad. They do not want him to continue his hard-line policies. Rather, Iranians apparently see Ahmadinejad as their toughest negotiator, the person best positioned to bring home a favorable deal -- rather like a Persian Nixon going to China.

Allegations of fraud and electoral manipulation will serve to further isolate Iran and are likely to increase its belligerence and intransigence against the outside world.

When I first learned of their article, I thought they might be journalists manipulated by pro-Ahmadinejad interviewees. But Ballen is president of Terror Free Tomorrow: The Center for Public Opinion (a nonprofit institute researching attitudes towards extremism), Doherty is deputy director of the American Strategy Program at the New America Foundation, and they've been doing these polls for 3 years now.
So how did word of fraud spread so quickly and convincingly -- convincingly enough to get today's thousands of Iranians out into the street despite truncheon-wielding security forces? Are we being manipulated, or are they? If they succeed in obtaining what they want, manipulation may not matter in the end -- except to the extent it is further evidence of media's power to shape events and our need to be wary, and chary, of it.
by Naomi Norberg at 6:02 AM

Thanks to Naomi for this cautionary tale and to Hope (below) for her contribution. Hard to draw any conclusions yet about events in Iran, given the welter of partial, unverified, and contradictory information. We outside are still blind folk, each touching a small part of a very large elephant.

The question remains how they counted 40 million paper ballots in less than 24 hours.