Rumors and commentary run rampant these days regarding President Barack Obama's nominations of our colleagues Dawn Johnsen (right) and Harold Hongju Koh (below left) and to become, respectively, the Assistant Attorney General in charge of the Justice Department's Office of Legal Counsel and the State Department's Legal Adviser.
► Last Wednesday, The Atlantic's Marc Ambinder said that Obama Press Secretary Robert Gibbs ruled out recess appointments for Koh or for Johnsen. Such appointments have been used in years past to put into office persons for whom an administration can't muster the necessary Senate votes. That should be a simple majority -- 50 votes plus, if needed, a tiebreaker vote by Vice President Joe Biden. But the word is that certain GOP Senators are blocking that procedure. Instead they're using a "hold" mechanism that requires Democrats to effect a "cloture." On the matter of cloture, which requires not 50 but 60 votes, Ambinder wrote of both Johnsen and Koh: "There simply aren't enough Democrats who will support either of them." (Not sure at all this is right. As for Johnsen, a couple Democrats are reportedly balking, but at least 1 Republican counterbalances. As for Koh, indications are that all Democrats and a handful of Republicans stand ready to vote "aye," if they'd only be permitted to vote.)
Ambinder's post endeavors to explain the roadblock by reference to the same claptrap about transnational-"ism" and reproductive rights defense that we IntLawGrrls have refuted here and here.
(Can anyone explain why these nominees' unequivocal opposition to torture works as a negative?)
► On Thursday, a story in The News Tribune of Tacoma, Washington, maintained that Johnsen's nomination to lead the top law office at Justice "is meeting stiff resistance in the Senate, stalled for a month by Republicans who say she's a polarizing figure because she aggressively criticized the Bush administration's legal rationale on torturing terrorism suspects and radical in her views on abortion rights." It quoted 2 Senators to this effect. Particularly perplexing: Texas' GOP Senator John Cornyn expressed shock that Johnsen "questioned whether the wartime paradigm that the president is the commander-in-chief was the appropriate framework of analysis for determining what the president's powers are during a time of war.'"
Quite obviously Cornyn has not read the GTMO briefs and jurisprudence that, combined with academic literature, show the position attributed to Johnsen to be shared by many in the mainstream of American law -- not to mention more than 1 Justice of the U.S. Supreme Court.
(Incidentally, when's an organization like the National Organization for Women -- better yet, the American Bar Association -- going to object to slurs like "'not qualified'" and lacks "'requisite seriousness'" (both slung by Cornyn) to describe a woman who's a constitutional law professor at a major law school, graduated Phi Beta Kappa and helped edit the Yale Law Journal, clerked for a federal appellate judge, practiced law with distinction, and already proved her mettle as the acting head of the Office she's now been tapped to lead?) 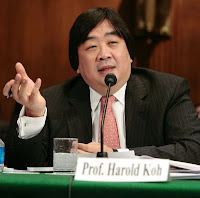 ► On Friday, a Foreign Policy blog said that unnamed sources on Capitol Hill and elsewhere had said that "[a]ll State Department nominees are on hold" by action of Senator Jon Kyl (R-Arizona), reportedly "because he is not satisfied with the information he has been receiving from the administration on the progress of arms control negotiations with Russia." The post immediately backtracked by naming several State nominees who in fact were confirmed last week -- even more curiously, it makes no mention of Yale Law Dean Koh, slated to become State's top international lawyer upon confirmation.
► On Saturday, finally, a Think Progress post claimed that in an e-mail Senate Majority Leader Harry Reid "told Koh’s supporters that he will bring Koh’s nomination for a vote sometime in the next two weeks"; that is, that he will seek the cloture vote he's so far avoided calling.
Not a word in this last post about Johnsen.
Though much is murky in these posts, 1 thing remains clear: It is well past time for top officials in this new administration to step into the ring and fight for these stellar nominees. As our colleague Christopher Eisgruber pointed out this weekend, supporters of these 2 include top-tier conservative lawyers: for Johnsen, Pepperdine Law Professor Douglas Kmiec, who held the OLC job during the Reagan administration; for Koh, Kenneth Starr and Theodore Olson, respectively, the Solicitors General during the 1st and 2d Bush administrations.
In our own humble effort to prod Reid -- and Holder and Clinton and, indeed, Obama -- to do so, today IntLawGrrls launches the clocks above. The timers re-count just how long it's been since the nomination of each of our colleagues was announced
What you can do:
► Spread the word by sending this post to Facebook, Twitter, and other sites and friends, 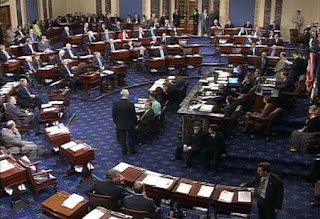 Here's hoping that we soon can send both timers to an early and happy retirement.
by Diane Marie Amann at 12:10 AM