(My thanks to IntLawGrrls for the opportunity to contribute this guest post on an article I published at 28 Oxford Journal of Legal Studies 443 (2008), downloadable by subscription at the hyperlinked site; earlier, bepress.com version available here)
In my recent article, Do Rules of Evidence Apply (Only) in the Courtroom? Deceptive Interrogation in the United States and Germany, I challenged the commonly held view that civil law legal systems such as Germany do not employ formal rules of evidence comparable to those that govern American courtrooms.
Civil law systems, which commit factfinding to mixed panels of lay and professional judges, are said to have less need for formal rules of evidence that withhold information from decisionmakers. In my article, I argued that scholars have failed to recognize that evidentiary rules can restrict not only the presentation of of 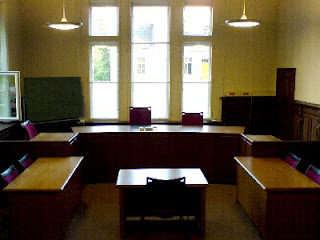 evidence at trial, but also the manner of its acquisition during the pretrial investigation. For this reason, existing scholarship overlooks a rich source of German evidentiary norms designed to shore up a German prohibition against deceptive interrogation. (By contrast, of course, the United States permits the police to obtain confessions through investigative lies.)
I argue that German regulation of police interrogation -- particularly its prohibition of deceptive stratagems -- plays an important role in shaping the factual record on which the legal systems assess guilt or innocence. The article identifies a number of institutional factors on which this system of pre-trial evidentiary regulation depends:
► the existence of a case file documenting all investigative acts;
► the accessibility of this case file to defense counsel and judges;
► the fact that information obtained during investigations becomes evidence as soon as it is acquired, rather than when it is presented at trial;
► verbatim transcriptions of all interrogation questions and answers, allowing prohibited investigation methods to become known;
► a more neutral investigative role assigned to police and prosecutors, who must investigate exculpatory as well as inculpatory circumstances;the requirement that convictions be justified in writing, so that appellate judges may more easily determine whether trial judges relied on confessions that should have been suppressed; and
► the fact that German evidentiary regulation centers at least as much if not more on the investigative process than on trial procedure.
(Credit for photo of German courtroom. An earlier IntLawGrrls post, challenging another assumption about civil law systems, is here.)
by Jacqueline Ross at 6:00 AM