An end to universal jurisdiction? 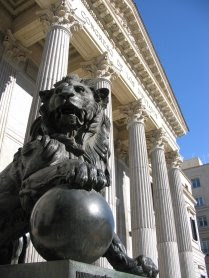 (Thanks to IntLawGrrls for giving me this opportunity to contribute another guest post.)

El Congreso de los Disputados (left), Spain's lower house of Parliament, has passed a bill that would limit the reach of universal jurisdiction and profoundly restrict Spain's ability to prosecute serious human rights crimes. (The legislative push was mentioned in this prior IntLawGrrls post.) The bill, available in English translation here, will go before the Spanish Senate for a final vote in the fall.
As is well known, the Spanish universal jurisdiction law was used to pursue former Chilean dictator Augusto Pinochet in 1998. Since then, the law has allowed Spanish courts to stand as a last resort for victims who cannot find justice at home:
► Using this law, Spanish courts have issued warrants for top Rwandan leaders and convicted an Argentine official for "dirty war" killings.
► The law also forms the basis for the Guatemala Genocide Case and the 1989 Jesuits Massacre Case in El Salvador, both now being litigated by the Center for Justice & Accountability, the San Francisco-based nongovernmental organization for which I am Executive Director.
As detailed here, the bill is flawed, yet there may well be constructive means by which the Spanish legislature can clarify the application of the universal jurisdiction law. For instance, the proposed bill correctly adds crimes against humanity to the list of admissible crimes. But the amendment will do nothing to streamline the legal process or to weed out spurious claims from the many legitimate human rights cases that have been brought. Worse still, this amendment may close the doors of Spanish justice to thousands of survivors of human rights abuses. This bill should not become law.
We'll continue to work with the Asociación Pro Derechos Humanos de España, and other partners around the world, to oppose this legislation as it stands and to seek reforms that will protect this powerful tool for human rights.
by Pamela Merchant at 6:30 AM

Are you sure crimes against humanity are not already in the Spanish law?