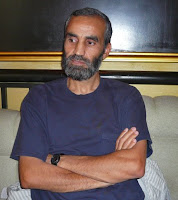 European countries reached agreement Thursday in Luxembourg to accept "innocent" Guantánamo detainess ("cleared for release" in American lingo. Each will decide what status to accord former detainees: refugee, asylum seeker, long-term visa holder, etc. The agreement signals progress, as not so long ago, only 5 EU countries had agreed to accept any former detainees (France is now home to Lakhdar Boumediene (credit for photo, right, 2 weeks after his arrival in Paris) of Boumediene v. Bush). But the agreement makes it clear that the 30-60 potential transferees (of 240 or so detainees) may have their right to free circulation within the EU limited if any of the close to 30 states parties to the Schengen acquis (which dispenses with internal borders and allows free movement within the 27 EU member states, except the UK and Ireland, as well Switzerland, Norway and Iceland) believes such a limitation necssary to avoid any ex-detainee from "compromising public order and national security."
This is certainly an improvement over outright refusal to take anyone, but there remains a problem of independent determination of any of the detainees' real dangerousness. Three countries, Germany, Austria and Italy, have made it quite clear they wlll not accept any detainees the US suspects of terrorist activities, which means they're leaving it up to US authorities to make a key determination. Gilles de Kerchove, the EU antiterrorism chief, stated the obvious when he excused the agreement's limitations: Guantánamo is a source of radicalization. But so are French jails. So here again, we're punishing people for dangerousness rather than guilt. While the 1951 Refugee Convention allows states to refuse to accept people who would be a threat to national security and/or have engaged in terrorist activities, a more independent inquiry or a higher level of proof might be more in keeping with the spirit of the convention.
by Naomi Norberg at 6:02 AM