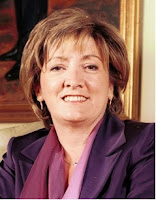 'Every time we fail to preserve a site, we share the pain of the state party.'

So said Dr. María Jesús San Segundo (left), Spain's Ambassador to the U.N. Educational, Scientific and Cultural Organization (and an economics professor at Madrid's Universidad Carlos III), respecting UNESCO's decision to remove Dresden from its list of World Heritage Sites.
¿Por qué?
Because the city has decided to go ahead with building the Waldschlösschenbrücke, a 4-lane bridge that opponents maintain "would be a blot on the unique Elbe valley and is sited in a particularly sensitive spot, near the old city, from where it could be seen." The decision makes the state party in question -- Germany -- the 1st country in Europe and only the 2d in the world to be removed from the list.