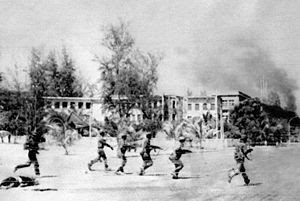 The Khmer Rouge seized power on April 17, 1975 (photo, left), marking “year zero” in what turned out to be a four-year campaign to create the “New Cambodia.” Upon the ouster of the American-backed Lon Nol (prior posts here and here), the Khmer Rouge launched a radical project of social reorganization drawing upon communist and Maoist thought to re-construct Cambodia on the backbone of an idealized vision of a rural proletariat. The draconian measures instituted by the regime in this quest included:
► the liquidation of the Lon Nol army and members of the former regime;
► the extermination of the elite and educated;
► a complete evacuation of the urban centers;
► the incineration of books, libraries, banks, places of worship, and university facilities;
► the criminalization of the usage of foreign languages;
► the abolition of money, private property, markets, wages, and salaries;
► the dissolution of families and the separation of children from their parents;
► the subjugation and execution of ethnic minorities;
► the prohibition of religious practice and education; and
► the systematic hunt for real and imagined political opponents.
By the time a Vietnamese invasion opened the killing fields for the world to see in 1979,

a greater proportion of the population [had] perished than in any other revolution during the twentieth century. 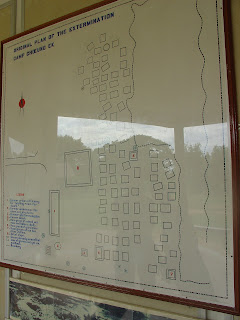 Karl D. Jackson, The Khmer Rouge in Context, in Cambodia, 1975-1978: Rendezvous with Death 3, 3 (Karl D. Jackson ed., 1989).
The roughly two million deaths during the Khmer Rouge era are largely considered by the general public -- within Cambodia and abroad -- to be genocide. (The photo at left depicts a map of mass graves). Indeed, Cambodia often bears the dubious distinction of being described as the first post-Holocaust genocide. The U.S. Congress described the Khmer Rouge era as follows:

The persecution of the Cambodian people under the Khmer Rouge rule, [during which time] the bulk of the Khmer people were subjected to life in an Asian Auschwitz, constituted one of the clearest examples of genocide in recent history.

United States Foreign Relations Authorization Act, Fiscal Years 1988 and 1989, Pub. L. No. 100-204, §906. In 1994, Congress passed the Genocide Justice Act, which authorized the creation of a documentation center in Cambodia, later named the Documentation Center of Cambodia (DC-Cam) to develop the United States proposal for the establishment of an international criminal tribunal for the prosecution of those accused of genocide in Cambodia.
The establishment of the Extraordinary Chambers in the Courts of Cambodia (right) to prosecute surviving members of the Khmer Rouge paves the way for the resolution of a lingering question in international criminal law:
► To what extent was genocide committed in Cambodia under the Khmer Rouge?
A quick read of the 1948 Genocide Convention reveals that much of the violence committed by the Khmer Rouge in Cambodia may not constitute genocide, primarily because the perpetrator group and the victim group appeared to share the same nationality, ethnicity, race, and religion. Instead, victims appear to have been targeted on the basis of what an objective assessment would describe as their membership in an undesirable political, social, or economic group. After great debate and compromise, the drafters of the Genocide Convention purposefully denied protection to political, social, economic, and other unenumerated groups. (Today's post below notes tension between the legal meaning of "genocide" and public response to the crisis in Darfur.) As a result, genocide is defined in Article II of the Genocide Convention, which entered into force in 1951, as

Thus, if the ECCC were to be strictly faithful to this original intent, it might reject most charges of genocide that might be brought against the surviving Khmer Rouge leaders. (Charges involving attacks against religious or ethnic minorities in Cambodia would have a better chance of surviving).
Despite this apparently dispositive conclusion, arguments exist for finding genocide in Cambodia based upon modern jurisprudential developments emerging from international criminal tribunals and domestic genocide prosecutions.
► First, the original intent of the drafters of the Genocide Convention to exclude protection to unenumerated groups is muted with respect to genocide prosecutions before modern international and hybrid tribunals. This is a function of the origins of these institutions, established treaty interpretation doctrine, and interpretive trends emerging from the various multilateral human rights institutions vis-à-vis their constitutive instruments. Collectively, these factors elevate text and treaty object and purpose as interpretive sources over idiosyncratic intentions of human rights treaty drafters.
► Second, contemporary courts engaged in genocide prosecutions have rejected definitions of the protected groups employed at the time of the Convention’s

drafting that, by today’s intellectual sensibilities, appear outmoded and even offensive. Instead, modern tribunals have focused on the subjective characterization of these groups within the impacted society at large and -- most importantly -- within the minds of the perpetrators in the dock and the societies that they terrorized. In this regard, international criminal jurists have eschewed identifying an objective or scientific definition of what are inherently contested and contingent concepts. This approach highlights the centrality of the crime’s specific intent element to determining the existence of the crime of genocide.
To be sure, normative arguments can be made about the legitimacy of these jurisprudential trends. Nonetheless, they exist as influential precedent on which the ECCC can draw if it is confronted with the genocide question in the Khmer Rouge context. (To date, no genocide indictments have been issued). In this regard, the ECCC can start from the proposition that the groups listed in the treaty have no independent content; rather, their meaning is inherently contextual, contingent, and historical and should be treated as such. This invites the ECCC to identify the subjective understandings of those terms as they existed within the relevant communities at the time the Khmer Rouge acted, whether or not such conceptions were shared elsewhere or have any objective content or modern resonance. Most importantly, the ECCC must endeavor to understand the intentions of the Khmer Rouge in implementing the radical policies that they did and the identities they ascribed to the individuals they targeted for extermination. As Tufts Law Professor Hurst Hannum has written:

The radical transformation of Cambodia envisaged by the Khmer Rouge required the racial, social, ideological, and political purification of the Cambodian nation, through the sociological and physical liquidation of a variety of groups considered to be irremediably tainted by their association with the old social order or otherwise unsuited to the intended new order.

International Law and Cambodian Genocide: The Sounds of Silence, 11 Hum. Rts. Q. 82, 85 (1989). This “purification” required the extermination or forced assimilation of all non-Khmer ethnic groups, including ethnic Vietnamese, Chinese, Cham, Thai, and indigenous hill communities. It also required the elimination of other individuals whose perceived social, economic, and political affiliations or histories rendered them inherently impure and subject to violent exclusion from the revolutionary program of nation-building. This included Khmer Rouge cadre denounced as spies or counter-revolutionary agents and individuals resident in the Eastern zones hiding “Vietnamese minds in Khmer bodies.”
In implementing this program, the Khmer Rouge were animated by an idealized vision of the “pure Khmer” as both the source and beneficiary of the revolution. This nationalistic vision, however, could not be based on true Khmer ethnicity alone.
► First, the Khmer Rouge considered many indicia of the Khmer tradition and identity to be retrograde, such as the deep attachment to Buddhism. These counter-revolutionary vestiges of a prior identity had to be excised from society.
► Second, many of the key members of the Standing Committee (such as Pol Pot, Nuon Chea, Sao Phim and Khieu Samphon) were of Chinese descent. To accommodate different “objective” ethnicities within the new Cambodian polity, the Khmer Rouge revived the term “Kampuchea,” even officially calling their party the Party of Democratic Kampuchea. The term dates from the 9th century and a romanticized period of the Angkor dynasty, which flourished in South East Asia for 600 years with its capital at the world famous Angkor Wat (below).

In the radical egalitarianism of the Khmer Rouge, all those who were proper Kampucheans were equal; all those who were not were expendable and, indeed, subject to elimination. In this way, the Khmer Rouge invented an ideal type -- with national, ethnic, political, and religious dimensions -- against which all citizens were to be measured. Individuals who did not adhere to 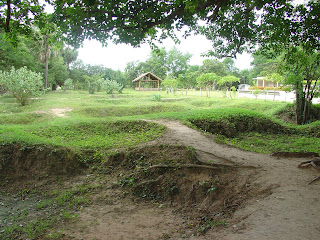 these multidimensional criteria were exempt from inclusion, dehumanized, and subject to elimination. (The photo at right is of Cheung Ek, one of the many killing fields around Cambodia).
A finding of genocide writ large in Cambodia is thus feasible through the application of the analysis developed in international and domestic genocide prosecutions. By the subjective approach, it is the Khmer Rouge’s belief system that matters. In the Khmer Rouge’s purification process, individuals from certain political, economic, and social strata were perceived as “imperfect” or “invalid” Khmer, incapable of re-education or assimilation. According to this view, these subsets of society were permanently stained by their prior affiliations and had to be purged lest they hinder the radical societal reformation envisioned by the Khmer Rouge.
An objective assessment of many of these target groups would categorize them as political, social, or economic groups. Viewing these groups through the lens of the Khmer Rouge cosmology, however, these prior social, economic or political affiliations were considered biologically determinative and thus irremediable--the equivalent of a racial, national, or ethnic group. As noted by Michigan Law Professor Catharine A. MacKinnon,

One of the enduring legacies of the Nazis was the notion that culture is genetic.

Rape, Genocide, and Women’s Human Rights, 17 Harv. Women’s L. J. 5, 13 (1994). These individuals were also identified via their exclusion from the majority national group, which fit the ideal type as measured by the Khmer Rouge leadership.
Assuming sufficient evidence exists of this cosmology, the ECCC could reach a finding of genocide writ large within Cambodia.