(Go On! is an occasional item on symposia of interest) Professor Marilyn Ford advises readers to save the date 18 September 2009 for a symposium in tribute to the Honorable Constance Baker Motley (below right), an IntLawGrrls transnational foremother thanks to our own Amy Senier. (photo credit)
Senior U.S. District Court Judge Baker Motley (1921-2005) was, and is, a giant of the U.S. civil rights movement and legal profession. According to her autobiography, Equal Justice Under Law (1999), Baker Motley was galvanized to take action against racism early in life. (IntLawGrrls posts here.)
Born in New Haven, Connecticut, to immigrants from the Caribbean island of Nevis, Constance Baker was denied access to local public recreation areas as a teenager. She set out to 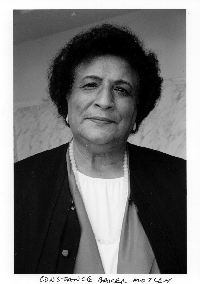 become a civil rights attorney despite the many economic, racial, and gender barriers ahead of her.
Baker attended Fisk University and earned degrees from New York University and Columbia Law School. Judge Baker Motley was the first African-American woman appointed to the U.S. federal judiciary, the first African-American woman New York State Senator, and the first woman to serve as Manhattan Borough President.
The young Constance Baker is said to have shown her mother a “For Colored Persons Only” sign she had pulled down from a wall. She wryly noted that it had been reasonable for her to do so since the sign was evidently “for” people of color. She proceeded to break it in half, vowing to work against racial segregation and discrimination. U.S. Supreme Court Associate Justice Ruth Bader Ginsburg described Judge Baker Motley’s subsequent trailblazing career in a 2005 tribute, “Human Rights Hero”.
Co-sponsored by Quinnipiac University School of Law and by Yale Law School, the event, “Constance Baker Motley: A Symposium on Her Life and Work,” will take place on Quinnipiac’s campus.
Scheduled panelists include leading civil rights scholars, lawyers, judges, historians, and journalists such as Lani Guinier, Elaine Jones, Drew S. Days, James B. Farmer, William E. Forbath, Henry Louis Gates, Jr., Vernon E. Jordan, Jr. Charles J. Ogletree, and Juan Williams. For registration information contact Professor Ford with a cc to Lauren Carolla at Lauren.Carolla@quinnipiac.edu .
It's great to see a true human rights hero being recognized in this way.
by Hope Lewis at 4:52 PM