A blow to democracy & human rights 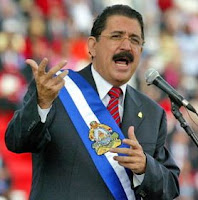 This week the armed forces of Honduras overthrew democratically elected President Manuel Zelaya (left), arresting him at home and bundling him off to Costa Rica in his pyjamas. The army then installed its own president, with the thin legal veneer of the Honduran Supreme Court's blessing. The Organization of American States, the Obama administration, and human rights groups protested and called for Zelaya's reinstatement.
The coup is a direct violation of the OAS's Santiago Commitment to Democracy and the Renewal of the Inter-American System. By adopting that Commitment during a 1991 meeting in Chile's capital, countries of the hemisphere established a mechanism for collective action in the case of a sudden or irregular interruption of the democratic political institutional process or of the legitimate exercise of power by the democratically elected government in any of the Organization's member states.
This commitment was reaffirmed in 2001, in the Inter-American Democratic Charter, which requires the suspension from the OAS of states where elected governments have been found to be illegally overturned.
So why did the Honduran armed forces, backed by the legislature and the supreme court, take what they knew would be a much-criticized action? The U.S. press has stressed the attempt by President Zelaya to change the rules on re-election and the close ties between Venezuela and Honduras.
But that's only a small piece of the story.
The re-election effort was part of a larger package. Its centerpiece was a call for a popular referendum on whether or not to call a Constitutional Convention. Had the referendum, which was supported by labor, peasant, environmental, and human rights groups, passed, Honduras would have joined Latin American countries including Colombia, Ecuador, and Bolivia, that had rewritten their constitutions after a broad-based (more or less) constitutional rewriting process.
These processes have been tumultuous and highly controversial elsewhere. But on the positive side, they have:
► Broken existing political logjams and dysfunction;
► Established broad rights for indigenous communities; and
► Set the stage for institutional reforms to protect land and the environment and to give the government greater control over resource policies, especially mining and forest projects. These projects, many sponsored by U.S. and Canadian companies, have affected water and other resources and generated widespread local opposition.
Indeed, there are movements afoot in other countries, like Chile, to use upcoming elections to push for a constitutional convention to remake the Pinochet-era constitution there (not to mention efforts in California to call a 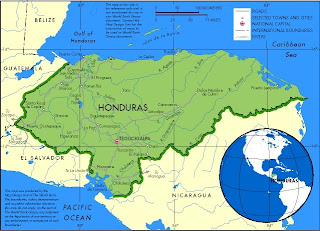 constitutional convention to remake our own dysfunctional, gridlocked and almost-broke system of government!).
That's what was at stake in Honduras, and why the powers supporting the status quo were willing to brave international criticism to try to derail a new constitution-building initiative.
by Naomi Roht-Arriaza at 12:02 AM

Democracy was saved in Honduras. In fact. You devote exactly zero space to exactly how this was a coup. Merely a snarky statement that the supreme court provided a "veneer" of legality. Nor do you elaborate on why it is merely a veneer.

Why was the military needed to provide logistical support for a referendum? Do they count the ballots also? Please.

The "new" president is from the same political party.

I have yet to fully understand the left's fascination and adoration of totalitarian regimes.