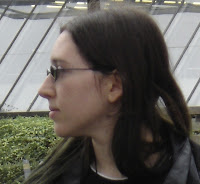 Eagle-eyed IntLawGrrls readers will have noticed a new byline gracing many of our "On This Day" posts this month. It belongs to Jocelyn Wolf (right), whom we're proud to welcome as the inaugural IntLawGrrls Legal Intern.
A member of the Class of 2011 at my own home institution, the University of California, Davis, School of Law (Martin Luther King, Jr. Hall), Jocelyn has an avid interest in international law, policy, and practice. Whetting her appetite was a semester abroad at the National University of Ireland-Galway in fall 2007. There she studied European Communities law with Dr. Laurent Pech, Jean Monnet Lecturer in EU Law and a contributing editors of International Law Prof Blog. (Jocelyn reports that she was fortunate to have used the used the EU Law textbook for which IntLawGrrl guest/alumna Gráinne de Búrca is a co-author.) Soon after, in spring 2008, Jocelyn earned her B.A. in International Relations and Linguistics from the University of California at Davis. This past semester, she was my student in Constitutional Law.
Jocelyn has chosen to dedicate her work on the blog to Benazir Bhutto (below left), the subject of many earlier IntLawGrrls posts. The U.N. General Assembly bestowed upon Bhutto a U.N. Prize in the Field of Human Rights in December 2008, a year after death ended her campaign to lead her native Pakistan once again. As stated in a 2008 account of that award: 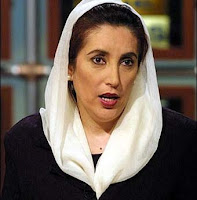 An ardent advocate for democracy and for the human rights of the most vulnerable sections of society, particularly women, children and minority rights, Ms. Bhutto was twice elected prime minister of Pakistan. After returning to Pakistan late last year following years in exile, Ms. Bhutto was assassinated in an attack in Rawalpindi.

Today Bhutto -- whose assassination is currently the subject of a 6-month U.N. inquiry -- joins other IntLawGrrls transnational foremothers in the list just below the "visiting from ..." map at right.
Heartfelt welcome!
by Diane Marie Amann at 6:01 AM