Here's about all that many of us trained in the common law would have to say about our Continental counterpart:

But this comparative criminal law nutshell distorts reality.
That's in part because neither the inquisitorial nor the accusatorial method is any longer discrete. Rather,

aspects of each method now occur in the other to a degree that distinguishing the two 'is almost a "metaphysical question" which is now sterile and obsolete,'

as I wrote a while back (p. 833 n.144), quoting a chapter by Françoise Tulkens (left), then a law professor at Belgium's University of Louvain and since 1998 a Judge on the European Court of Human Rights, in The Criminal Process and Human Rights (1995).
The nutshell above is also distorted because even in France, the country that promulgated the Napoleonic Code, the investigating judge long ago lost considerable power. Our colleague Mireille Delmas-Marty (below left), Chair of Comparative Legal Studies & Internationalization of Law at the Collège de France and editor of the 1995 Criminal Process volume quoted above, traced this evolution in a recent Le Monde commentary. Her essay called into question aspects of a reform package put forward in March by a committee of jurists assembled last year by 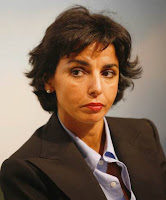 France's Minister of Justice, Rachida Dati (right).
Delmas-Marty noted that the juge d'instruction used to handle 40% of all criminal matters, "making him the most powerful man in France." No more. The juge's share dropped to 20% by 1960 and shrank to 8% by 1989. Today it's a measly 4% of all criminal matters.
Why the decrease?
Among the reasons, Delmas-Marty asserted, were reforms that increased the protections owed to persons under investigation. Even as those reforms were instituted, the prosecution gained more authority to act during the preliminary phases of a criminal case, and by means less cumbersome than those of the investigating judge. Examples of that new authority:
► Since 2007 victims seeking to pursue a criminal case via the partie civile mechanism were required first to address the prosecutor, not the juge. (Aside of note: Exercise of the power of investigating judges in Spain to pursue extraterritorial criminal investigations even in the face of opposition by the public prosecutor now faces resistance. As detailed here, here, and here, the Spanish government is working to require concrete jurisdictional links to Spain and "proof that no other national court system has taken up a given case" -- even as the most noted exerciser of extraterritorial criminal jurisdiction, Judge Baltasar Garzón, faces a misconduct inquiry related to an investigation into crimes during Spain's Franco era.)
► A bill that would effect domestic implementation of the Rome Statute of the International Criminal Court likewise gives the prosecution a "monopoly" over the pursuit of international crimes.

Thus did the French system shift toward an accusatorial method -- in Delmas-Marty's view, not in a good way. Prosecutorial power expanded even as fair-process safeguards retracted. The European human rights court wrote last summer in Medvedyev v. France that

the public prosecutor is not a 'competent legal authority' within the meaning the Court's case-law gives to that notion: as the applicants pointed out, he lacks the independence in respect of the executive to qualify as such.

In her commentary Delmas-Marty urged the following "re-equilibration of powers" as the current reform effort proceeds:
► Guarantees of independence and impartiality of the public prosecutor must be reinforced.
► Should the juge d'instruction be replaced with "a new 'judge of investigation and of liberties,'" as proposed, the granting to the latter judge of genuine power to supervise the public prosecutor throughout the course of investigation. Quoting Sorbonne Law Professor Geneviève Giudicelli-Delage, Delmas-Marty called for an "'optimum distance'" between the judge and the prosecution "because if the judge is placed too close he is blinded, but if he is too far away he is blind."
► Rights of the accused and the presumption of innocence must be strengthened by allowing for greater judicial oversight of prosecutorial action and for improvement of legal aid for the poor.
► Victims who wish to proceed as parties civiles should once again be permitted ask the judge directly to open a criminal investigation.
In words applicable to any system of criminal justice, Delmas-Marty concluded:

Whether it is a matter of the investigatory or the adjudicatory phase, it is not just technicalities, but also policy, that is at stake. The legitimate desire to simplify procedures and speed decisionmaking should not result in a power shift that works to the detriment of judges whose independence is guaranteed by the Constitution and to the benefit of a prosecutor who remains under the orders of the Minister of Justice.

Thanks, Diane. I hadn't read the whole piece in Le Monde, but MDM would seem to have left out a key political issue (which is typical of the French jurist's view that law & politics are separate): the real power of the investigating judge today became evident in the 1990s' investigations led by Eva Joly, for example, into major political party corruption. Such cases have been squelched under Sarkozy, who has now proposed to be rid of the nuisance once & for all. The juge des libertés & détentions was instituted some time ago and does not seem to provide the protection s/he is supposed to, becoming more a judge of detention than of liberty.
Also, I"ll have to read the ECHR case you cite, but that court held in the '80s, I believe, that the French public prosecutor counts as an independent magistrate for purposes of reviewing police custody (i.e. how long can one be held without presentation to "a judge"?), whereas, the prosecutor is directly subordinate to the minister of justice, a not-so-independent executive officer.