Luke Cole (left), a pioneer of the environmental justice movement, died in a car accident on June 6, 2009, while on sabbatical in Uganda. He was only 46, but had already accomplished so much in his career and inspired a generation of up-and-coming lawyers to bring together environmental and social justice concerns. He has long been one of my heroes, someone who had the passion, empathy, and vision to push both the environmental and civil rights/human rights movements to come together and address the disproportionate distribution of environmental goods and bads. He and the organization he founded, the San Francisco-based Center on Race, Poverty, and the Environment, have played a critical role in so many major environmental cases, including most recently a suit brought against major oil and power companies for their contribution to climate change by the village of Kivalina. (credit for photo of Center reports, below right)
Many who knew Luke Cole much better than I did have commented on the wonderful, rich human being he was. When I had the opportunity to interact with him, I was struck by his unusual warmth and modesty. Although he had accomplished so much already, he was extremely collaborative, exchanging syllabi and materials for teaching climate change. I am so saddened by the loss of this tremendous person, and so inspired by his life and contributions.
The efforts of Luke Cole and other pioneering environmental justice lawyers were the reason I went to law school; with their example as a model, I wanted to work on the confluence of environment, human rights, corporate responsibility, and development.
As I reflected on Luke Cole and the environmental justice movement this week, I was struck by the confluence between his death and the settlement in the Alien Tort Claims Act case over Ken Saro-Wiwa's execution and other human rights violations in Nigeria blogged about by Rebecca Bratspies earlier this week. Ken Saro-Wiwa was executed in December of my first year of law school, and I had the privilege of helping on the case in its early stages. Shell's press release about the settlement (over 13 years later), acknowledging the harm suffered and continuing to deny any responsibility for the human rights violations, reinforces the difference that litigation can make and the long road ahead for environmental justice. Even as this lawsuit settles, Shell and other oil companies in Nigeria continue to flare huge amounts of gas despite domestic litigation brought to stop the wasteful practice with its human consequences.
Luke Cole contributed tremendously to the understanding of environmental injustice and the development of legal mechanisms to address it. For those wishing to honor his memory and work, 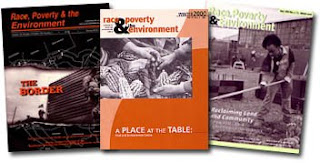 his family has suggested donations be made to the Center on Race, Poverty, and the Environment.
by Hari M. Osofsky at 10:00 AM