'Like any other government official, government lawyers are responsible for the foreseeable consequences of their conduct.' 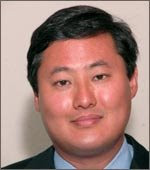 why he denied a motion to dismiss a challenge to Bush-era detention and interrogation techniques. (photo credit)
In the lawsuit captioned Padilla v. Yoo, Case No. 08-00035, on which IntLawGrrls posted when it was filed, onetime "enemy combatant" detainee