On this day in ...
… 1966, the U.S. Supreme Court ruled in Miranda v. Arizona that police must inform suspects of their rights before questioning them. Chief Justice Earl Warren wrote in his opinion for the Court: 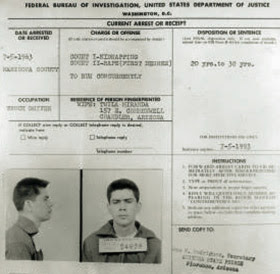 This section of the opinion has evolved into what's known as the Miranda warnings. developed to protect the individual's Fifth Amendment right against self-incrimination." (credit for photo of law enforcement file on petitioner Ernesto Miranda)
… 1944 (65 years ago today), U.N. Secretary-General Ban Ki-moon (below left) was born in Korea. The 8th Secretary-General, Ban succeeded Kofi Annan on