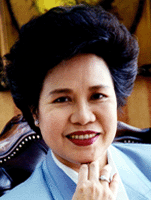 On this day in ...
... 1945, Miriam Defensor Santiago (left), a Senator in the Philippines, was born in Iloilo in that country. As a child, she excelled in school, finishing college on time despite suffering a severe illness. She went on to graduate from the University of the Philippines College of Law in 1969. She continued taking courses, and at the age of 50 completed a master's degree in religious studies at the Maryhill School of Theology. For her work as a crusader against corruption in the Philippines she received a Ramon Magsaysay Award, known colloquially as the Asian Nobel Prize, in 1988. Her resume also includes employment as a lecturer, professor, Quezon City regional trial judge, and Legal Officer to the U.N. High Commissioner for Refugees. In 1992, Santiago campaigned to be President of the Philippines, on the slate of the People's Reform Party, which she founded. She lost, claiming "electoral irregularities." She ran for president again in 1998, and again lost. Having served as a Senator from 1995 to 2001, she was re-elected in 2004. In 2008, Santiago was the Philippines' nominee for the International Court of Justice. She won in the United Nations' General Assembly but not in its Security Council.
... 1954 (55 years ago today), Paul Rusesabagina (below left) was born in Gitarama, Rwanda. He was a hotel manager at the Hôtel des Mille Collines during the 1994 Rwandan genocide. As a result of his efforts, 1,268 refugees survived under his protection at the hotel. The movie Hotel Rwanda (2004) was inspired by his actions. In his memoir, An Ordinary Man (2007), and in interviews, he's said:

Rusesabagina began the Hotel Rwanda Rusesabagina Foundation to aid victims of the genocide by giving direct aid to orphans and by encouraging a "Truth, Justice, and Reconciliation Commission." Today, he lives in Belgium with his wife, Tatiana, and their 6 children. (photo credit)

(Prior June 15 posts are here and here.)