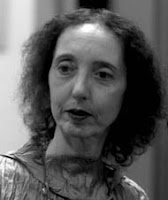 On this day in ...
... 1938, Joyce Carol Oates (right) was born in Millersport, New York. She studied English at Syracuse University, and received her M.A. from the University of Wisconsin in 1961. Oates has had a very prolific writing career in various genres, including horror, supernatural fiction, nonfiction, and, under the pseudonym Rosamond Smith, mystery fiction. (photo credit) Oates is known for her violent writing, often with women abused at the hands of men. On the question of why her writing is violent, Oates contended that the question is sexist, and wrote,

The serious writer, after all, bears witness.

Among her honors are the National Book Award, 3 Pulitzer Prize nominations, and the 2007 Humanist of the Year. Oates also has taught for most of her life, 1st at the University of Detroit, then at the University of Windsor, and, since 1978, at Princeton University.
… 1915, Britain's 1st Women’s Institute (logo below left) meeting took place at Llanfairpwll on Anglesey, in north Wales. Its aim was to revitalize rural communities and encourage women to help produce food during World War I. Later, it campaigned for improvements in women's education, and lobbied governments about family-planning facilities and equal pay. Today, its website says,

We play a unique role in providing women with educational opportunities and the chance to build new skills, to take part in a wide variety of activities and to campaign on issues that matter to them and their communities.

The movie Calendar Girls (2003) is based on the nude calendar that an affiliate, the Rylstone Women’s Institute, produced to raise money for the British organization Leukaemia Research.