On this day in ...
… 1961, Kuwait declared independence from the United Kingdom. Back in 1899, Britain had concluded a protectorate agreement with the ruler of Kuwait (flag at left). In it the ruler promised not to conclude treaties with other powers, to admit no foreign agents, and to cede no part of his territory without British consent. According to the independence agreement concluded on this day in 1961, relations between the 2 countries should continue to be governed by a spirit of close friendship, and, when appropriate, the 2 governments would consult on matters of concern to them both.
… 1939 (70 years ago today), Grace Abbott (below right), American social reformer, teacher, and writer, died in Chicago, Illinois. Concerned about the low pay and long hours required of children working in factories, Abbott became a leader in the fight for federal children's rights legislation. As associate of Jane Addams, Nobel Peace P 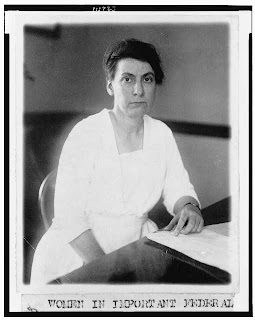 rizewinner and IntLawGrrls transnational foremother, Abbott served as head of the Children's Bureau in the Department of Labor from 1921 to 1934. She was the official representative of the United States on the League of Nations' advisory committees on traffic in women and on child welfare from 1922 to 1934. Upon her resignation, President Franklin D. Roosevelt described her career as one of

inestimable value to the children, the mothers, and fathers of the country, as well as to the Federal and State governments.

From 1934 until her death, Abbott continued working for social welfare as a professor at the University of Chicago and as chair of international labor conferences and state committees dealing with child labor. (photo credit)