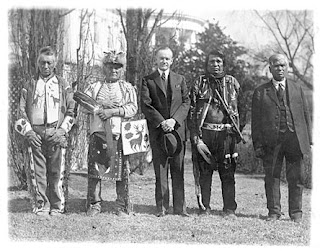 On this day in ...
... 1924 (85 years ago today), President Calvin Coolidge signed into law the Indian Citizenship Act, then posed with Osage men for the photo at right, taken on the White House lawn. (credit) Until that day Native Americans had been admitted to citizenship in the United States of America only by marriage to white men, through military service, or by a few other special means; they were not considered citizens by birth, nor permitted to citizenship through naturalization. The new statute provided:

'Be it enacted by the Senate and house of Representatives of the United States of America in Congress assembled, That all noncitizen Indians born within the territorial limits of the United States be, and they are hereby, declared to be citizens of the United States: Provided, That the granting of such citizenship shall not in any manner impair or otherwise affect the right of any Indian to tribal or other property.' 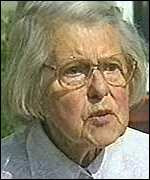 ... 2005, Melita Norwood died at age 93. The Londoner had led a life unnoticed until 1999, when it was discovered that she'd been a Soviet spy for more than 4 decades. Norwood (left) had joined the Communist party in 1936. (photo credit) The she started working a clerk and a secretary for a metallurgical firm that worked on Britain's nuclear program, "and was soon passing research data to the NKVD, the Soviet spy network and predecessor of the KGB." An octogenarian, widow, and great-grandmother by the time she was exposed, she said her only regret was being caught: