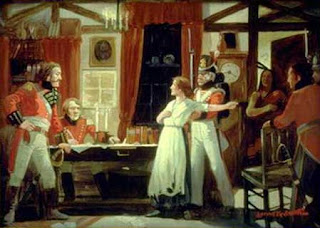 On this day in ...
… 1813, Laura Secord (right, at center) set out to warn British forces of an impending U.S. attack on Queenston, Ontario, during the War of 1812. Laura had married James Secord in 1797. In the early 1800s the coupled moved to Queenston. When the American army invaded, they were forced to billet U.S. officers in their home. On this evening in 1813, they overheard the Americans plan to attack British forces. Since James was disabled by a battle wound, and despite the danger, Laura took the message. Her journey took her more than 18 hours, but eventually she reported to the British officer in charge. (image credit; click here for a 1-minute movie about the event.) Two days later, some 400 Indians successfully ambushed an American force at the Battle of Beaver Dams. In the official reports of the victory no mention was made of Laura Secord; indeed, her role was not acknowledged until 1860. Thereafter, she became celebrated as a heroine in history, poetry, and drama. In 2003, she was designated a Person of National Historic Significance by the Minister of Canadian Heritage.
… 2009 (today), World Humanist Day "is celebrated… as a way to spread information -- and combat misinformation -- about the positive aspects of humanism as a philosophical life stance and means to affect change in the world.” The American Humanist Association has this to say:

Humanism is a progressive philosophy of life that, without theism and other supernatural beliefs, affirms our ability and responsibility to lead ethical lives of personal fulfillment that aspire to the greater good of humanity.

One of IntLawGrrls' transnational foremothers, Olympe de Gouges, was a humanist.