On this day in ...
... 1772, Somersett's Case, in which the Court of King's Bench held that slavery was unlawful in England although not elsewhere in the British Empire, was decided. It is one of the most significant milestones in the campaign to abolish slavery throughout the world. In delivering judgment, Judge William Murray, known as Lord Mansfield (below left), said: 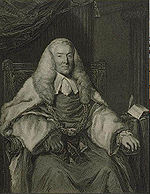 The state of slavery is of such a nature, that it is incapable of being introduced on any reasons, moral or political; but only positive law, which preserves its force long after the reasons, occasion, and time itself from whence it was created, is erased from memory: it's so odious, that nothing can be suffered to support it, but positive law. Whatever inconveniences, therefore, may follow from a decision, I cannot say this case is allowed or approved by the law of England; and therefore the black must be discharged.

It was not until 1807 that Parliament abolished the slave trade (prior post). Slavery continued to exist in various parts of the British Empire until it was finally abolished by Act of Parliament in 1833.
… 1920, Marea Hartman, who is credited with the post-World War II integration of British women athletes into full competition and parity with their male counterparts, was born in London. A personnel officer for a paper manufacturer for more than 30 years, Hartman spent

most of her off-hours working for athletics without remuneration. She is considered among the longest-serving and most influential people in athletics. For 30 years she was Honorary Secretary of the Women's Amateur Athletic Association and for 13 years was Chairman of the Women's Commission of the International Amateur Athletic Federation. She was named President of the British Athletics Federation in 1991. Hartman became a Dame's Commander of the Order of the British Empire shortly before her death in August 1994. (credit for 1996 British stamp honoring Hartman as 1 of 5 “20th Century Women of Achievement")