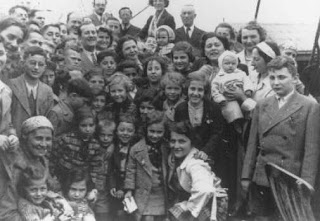 On this day in ...
... 1939 (70 years ago today), the U.S. Coast Guard rebuffed the SS St. Louis, "a cruise ship carrying more than 900 Jewish refugees from Nazi Germany," when it tried to enter the United States via Miami, Florida. (credit for photo of refugees aboard the ship) As a Miami Herald report recounted on the 20th anniversary of this event, the ship had sailed from Hamburg and 1st attempted to disembark in Havana, Cuba. It would be forced to return to Europe, where, according to the U.S. Holocaust Memorial Museum, Britain, the Netherlands, Belgium, and France took in 288, 181, 214, and 224 passengers respectively. All but one of the persons relocated to Britain survived the war; of those returned to the European continent, only about half -- 278 -- "survived the Holocaust."
... 1970, in "an event officially designated by the King as Tonga's 'reentry into the community of nations,'" the South Pacific island Kingdom of Tonga won independence from Britain. It had been a protectorate of the latter country since conclusion of a treaty of

in 1900. Today Tonga (flag at left) is the last kingdom in Polynesia.