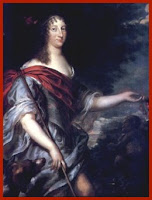 On this day in ...
... 1654 (355 years ago today), Sweden's Queen Christina abdicated the throne, transferring her power to her cousin, Charles Gustavus of Pfalz-Zweibrücken. She had been born in December 1626, the only heir to her father the king, who'd ordered her educated as a boy. She became queen at age 6 when her father died. Among her achievements was to have "initiated the end of the Thirty Years War, culminating with the Peace of Westphalia in 1648." Immediately after her abdication Christina (left) began traveling, and soon made a public conversion from the Lutheranism of her childhood to Catholicism. Subsequently she became embroiled in various schemes to rule various places, none of which succeeded. She died in 1689 and was buried in St. Peter's in Vatican City, "an unusual honor for a woman." (image credit)

... 1973, faced with a backlog of 17,462 immigration cases, only a hundred of which it could process in any given month, the Canadian government launched a program to help undocumented immigrants become Canadian citizens. More than 50,000 persons would apply for landed immigrant status in the next 4 months.