One small step for immigrants . . . 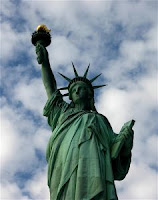 While the economic crisis may have pushed President Obama's plans for comprehensive immigration reform into next year and beyond, Democrats in the legislature are already offering a preview of good news for immigrants. Moreover, given the vast discretion awarded to the executive in enforcing immigration law, we may see a sea change in the treatment of immigrants before any immigration reform bill hits the floor of the legislature.
This Wednesday, Senator Leahy held a Judiciary Committee meeting to discuss the Uniting American Families Act of 2009, a bill that would extend those immigration benefits currently offered to married heterosexual couples to "permanent partners." The latter are defined as individuals over 18 years of age in a monogamous, financially interdependent relationship intended to be a lifelong commitment, but unable to marry. This amendment would thus allow an LGBT U.S. citizen in permanent partnership with a non-citizen to sponsor her partner for a green card and an LGBT asylee or refugee to designate his partner as a derivative recipient of his asylum or refugee status, among other benefits. The impact on LGBT couples would be tremendous, but of course, as the NY Times describes, political opponents have already reacted strongly. This will not be one of those "areas of agreement" that Obama seeks to identify; brace yourselves for a long, hard fight -- but at least it's being fought.
On the same day, Attorney General Holder confirmed that non-citizens are entitled to effective assistance of counsel in immigration hearings. This wise step vacated former AG Mukasey's decision in Matter of Compean (about which IntLawGrrl Dina Francesca Haynes posted here), less than two weeks before Obama took office, to overturn long-standing precedent establishing a framework for bringing ineffective assistance of counsel claims in immigration court. Bringing great cheer to the hearts of immigrants and proceduralists alike, Holder notes that the process used by Mukasey to overturn the ineffective assistance of counsel framework was insufficient, and seeks instead to create

one that affords all interested parties a full and fair opportunity to participate and ensures that the relevant facts and analysis are collected and evaluated.

(In the meantime, the pre-Compean framework remains in place.) While this standard may seem a bare minimum of procedural fairness, it represents a great step towards transparency and fairness in an area of law heretofore characterized by neither. Here's hoping it's the first of many such steps.

This is indeed good news, Jaya. A new law was just given final approval in France that eliminates the pre-existing effective representation immigrants received. They now will receive only "information," from a variety of groups, some linked with Sarkozy's party, rather than with the one militantly pro-immigrant group that held the monopoly in access to detention centers and informing and representing asylum seekers & others held in detention.

This really is good news. Thanks for posting about it.