(Many thanks to IntLawGrrls for the opportunity to contribute this guest post.)
As my colleague, IntLawGrrl Beth Van Schaack, and I recently made the rounds of various women’s groups during our research trip to Costa Rica, attempting to get a sense of whether and how the world of international human rights might be employed to help to mobilize those working on behalf of women’s status in Central America, everyone spoke of “la Rosita.” They did so as if her case had happened only yesterday. In fact, it had been six years since the then-nine-year-old girl was found to be pregnant and was refused an abortion by the Costa Rican government’s health service on the grounds that the pregnancy did not threaten her life.
Rosita’s story is layered, and has unfolded over the interceding years in ways that are at once horrific and mundane.

In Costa Rica, doctors, lawyers and health advocates invoke it to illustrate any number of problems plaguing women’s autonomy in their region of the world. (One of her drawings, entitled "Rosita sad," is at left.) Rosita’s mother brought her daughter to the doctor when the girl began complaining of stomach pain. It took several days before they realized she was just over three months pregnant. When she was transferred to San José for care, doctors put her in the obstetrical ward of the women’s hospital rather than in the children’s hospital.
Somehow, the media learned of Rosita’s pregnancy, which allegedly resulted from her having been raped by an acquaintance. Costa Rican law permits therapeutic abortions when the pregnancy poses a danger to a woman’s life or physical health. Perhaps the publicity around her case shaped her doctors’ decision that Rosita did not qualify for such an exception to the general ban on abortion.
With the help of local activists, the family returned to their home state, Nicaragua, where three doctors verified, in accordance with the law at that time, that the pregnancy was in fact life-threatening. Rosita obtained an abortion, but by then, her case had become a cause

célèbre around the world. Filmmakers made an award-winning documentary (trailer) telling of her plight. Narrated in part by Rosita's mother and stepfather (right), the film expresses the hope that the abortion had been a way to permit her to resume her childhood.
Meanwhile, anti-abortion advocates vowed to tighten the laws that had permitted her to obtain a legal abortion. Daniel Ortega was elected president of Nicaragua on a platform supporting a complete ban on abortion. In 2006, Nicaragua became one of 4 countries in the world to ban abortion under all circumstances, including when pregnancy poses a threat to the life of the mother.
In late 2005, Rosita, still a child, became pregnant again. This time she carried her baby to term, and DNA testing determined that Rosita had been impregnated by her stepfather. It is now widely accepted that he caused her earlier pregnancy as well. In November 2007, he was sentenced to 30 years in prison. Today, Rosita and her baby live in state custody.
The women with whom Beth and I spoke in Costa Rica were on the front line of the struggle to improve women’s lives in their country and in their region of the world. Each spoke of Rosita’s case, and yet her story only emerged in bits and pieces:
► One group was most interested in the ensuing prosecution of the nine women who had assisted Rosita’s escape and helped her get her legal abortion.
► Others focused on the way the case has been used by anti-abortion activists to slander women’s health advocates in Nicaragua and throughout the region.
► Another recounted the manner in which Rosita’s mother’s initial ambivalence about abortion, coupled with the media attention the case received, left the doctors with no real alternative but to deny the abortion.
No one spoke about the manner in which Rosa initially became pregnant. No one talked about the fact that she became a mother two years later, while still a child. No one mentioned that the law had not managed to protect Rosa from her abuser.
Instead, we spoke of the grey space beneath the law in which girls and women presently struggle 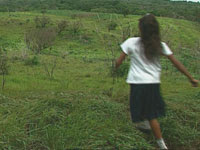 to find a safe path to walk through their lives. It became clear that the law is only part of what circumscribes women’s status in their country, as in our own. To speak of rights was to tell only a half-truth. And yet, to ignore rights language altogether was to invite in the resignation that accompanies oppression. It was to feel shamed and humiliated, rather than simply afraid.

by Michelle Oberman at 6:01 AM