A Servant of One's Own

(My thanks to IntLawGrrls for this opportunity to guest-post on my article recently published in the Berkeley Journal of Gender, Law, and Justice.)
My essay, "A Servant of One's Own: The Continuing Class Struggle in Feminist Legal Theories and Practices", starts by taking a look at a wonderful book that I read when it was first published in England. It is Mrs. Woolf and the Servants: An Intimate History of Domestic Life in Bloomsbury (2007) by Newcastle University Professor of Modern English Literature and Culture Alison Light. I’d recommend the book even if you think Virginia Woolf is overrated or overexposed.
In many ways, Woolf is just a prism refracting working class life and 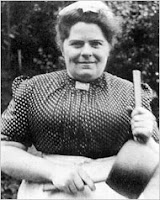 relations amongst the classes in Victorian Great Britain. Alison Light does a pretty good job of not letting Virginia Woolf (and her husband Leonard) become the book’s moral and empathetic focus. The lives of the domestic servants maintain center stage. (credit for photo at left of Sophie Farrell, who cooked for Woolf) Additionally, domestic service is considered in broader social and political frameworks. My essay provides some of the legal background and developments, especially as women struggled for the vote -- and some women obtained it. But not all women, for the original voting qualifications operated to exclude domestic servants.
The essay then considers two recent legal developments.
The first is Long Island Care at Home v. Coke (2007), in which a unanimous U.S. Supreme Court upheld a regulation that exempted certain employees in "domestic service" from minimum and overtime wage laws even if they were hired by a company rather than a household. The essay considers the oral argument and the opinion, both of which make Evelyn Coke (below right), the servant, as invisible and nameless as the ideal servants in the Victorian era. (photo credit)

The second legal development is the trial and proceedings in U.S. v. Sabhnani, 566 F.Supp.2d 139 (E.D.N.Y. Jul 19, 2008), in which the United States prosecuted and a jury convicted a woman and a man for "forced labor" and "document servitude" of two women from Indonesia. This case received a great deal of press with much vilification of the convicted woman, Varsha Sabhnani, who was dubbed “Cruella.”
In comparing the situations of Virginia Woolf and her servants, Long Island Care at Home, Ltd. and its servants, and Varsha Sabhnani and her servants, I found many odd similarities. Issues of migration, immigration, race and ethnicity complicated all the relationships. As for gender, I think it can be very easy to see “class” issues when we think of master/servant, and less simple when there is a woman – perhaps even a feminist woman – in charge. I argue that any relationship categorized as "servant" and "master," even when the "master" is a "mistress," and even when the master/servant dichotomy is viewed as a relatively equal contractual relationship rather than one based on status, is deeply problematical. I also think that feminists need to be much more attentive to class, even when it is messy.
by Ruthann Robson at 6:01 AM

Welcome Ruthann. Your essay sounds like it raises some very important--and often overlooked--issues. I've downloaded it and look forward to taking a look.