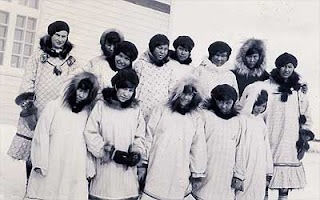 (My thanks to IntLawGrrls for the opportunity to guest post on my new paper.)

aboriginal Canadians to recognize and acknowledge that the residential school system was racist, abusive, and fundamentally wrong, not only in its practice but also in its intent. Indigenous leaders may use transitional justice to push this cognitive transformation, to critique present policy by drawing conceptual links to past policies. For indigenous peoples, transitional justice is effective to the extent it links the past with the present. The “transition” is to a relationship in which connections between past and present are firmly acknowledged, and in which the past guides present conceptions of obligation.
(credit for photo made at All Saints Indian Residential School, Aklavik, Northwest Territories; credit for TRC logo)

Welcome, Courtney and thank you for this very enlightening post.