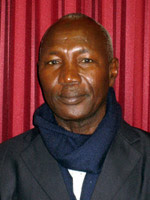 "Toward a Comprehensive Strategy for Sudan" is the title of today's hearing before the Senate Foreign Relations Committee.
The session begins at 10 Eastern time this morning at 419 Dirksen Senate Office Building in Washington, and should also be available on webcast and C-SPAN.
Scheduled witnesses include Dr. Mohammed Ahmed (left), a Darfuri physician and peacemaker who's been honored as a Human Rights Laureate by the Robert F. Kennedy Center for Justice & Human Rights. Earlier this year Dr. Mohammed visited the California International Law Center at King Hall, of which yours truly is director, to meet with students working on our ongoing joint RFK-CILC Darfur Project on transitional justice.
Also set to testify before the Foreign Relations Committee are: retired Air Force Major General Scott Gration, the President's Special Envoy to Sudan; Earl Gast, Acting Assistant Administrator for Africa at the U.S. Agency for International Development; Dr. David Shinn, former Ambassador to Burkina Faso and to Ethiopia, and now an Adjunct Professor

in international affairs at George Washington University; and Susan Page (right), formerly head of the Rule of Law program for the U.N. Mission in Sudan and now Regional Director for Southern and East Africa Programs for the National Democratic Institute.
The hearing provides an occasion for review of recent developments respecting Sudan (prior IntLawGrrls posts). For example:
► Earlier this month, a 5-member arbitration tribunal issued its resolution of a boundary dispute between the Government of Sudan and the Sudan People’s Liberation Movement/Army, respecting the Abyei Area in South Sudan. Some in the south are said to have warned they may appeal the decision, which drew a line through the oil-rich region.

► Respecting the western region of Darfur, the indictment by the International Criminal Court of Sudanese President Omar al-Bashir continues to stir controversy. Via a resolution at the African Union summit earlier this month, many leaders rallied on Bashir's behalf and railed against the ICC and its Prosecutor, Luis Moreno-Ocampo. But just this week, Bashir was a no-show at an African summit in Uganda. Reports are that Bashir's scheduled visit was "blocked" by President Yoweri Museveni of Uganda, an ICC member state. The move follows the apparent notice to Bashir that he might face arrest if he attended the inauguration of South African President Jacob Zuma of South Africa, also an ICC member state. Yet the policy of Zuma's government remains unclear. And as our Opinio Juris colleague Kevin Jon Heller's noted, Botswana's said it would adhere to its ICC obligations if the indictee entered its jurisdiction.
► Some maintain that it's not only Africa that's in disarray, but that the same could be said of Sudan policy in the United States. Last month Gration said "that the Sudanese government is no longer engaging in a 'coordinated' campaign of mass murder in Darfur," but rather what's occurring now is "' the remnants of genocide.'" The Washington Post's Colum Lynch saw in the remarks evidence of "an emerging rift between Gration and Susan E. Rice [below right], the U.S. ambassador to the United Nations, who accused the Sudanese leadership of genocide as recently as two days ago." An op-ed writer agreed. In testimony yesterday at a House Foreign Affairs Committee hearing on peacekeeping, however, Rice spoke favorably of Gration's mission; her focus was pressing Sudan to allow more aid workers into Darfur. Her prepared statement included these words:

Darfur is about the size of California, with a pre-war population of 6.5 million. Only

twenty thousand peacekeepers are inherently limited in their ability to patrol territory so vast, and to protect so many civilians. Imagine how much more difficult their task becomes when the host government actively hinders their efforts, the parties balk at cease-fire talks, and the peacekeepers are deployed below their full operating capacity.

The Committee's Senators will have much to talk about today.
by Diane Marie Amann at 12:03 AM

Just to complete Your report, look at the rich gallery of political boundaries shown in http://www.pillandia.blogspot.com
Best wishes!