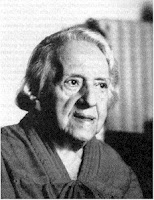 I wish to dedicate my guest contribution to IntLawGrrls, posted above, to María Zambrano Alarcón (left), a Spanish essayist and phenomenological philosopher.
Despite the rarity of Spanish women essayists and philosophers, she chose as her vehicle the philosophical essay. She left more than one hundred articles and twenty-eight books, particularly impressive considering the gender and culture barriers that she faced in pre-Civil War Spain and postwar exile in Cuba, Mexico, Puerto Rico, Italy, and France. Exile and her affiliation with Spain's anti-Franco Republicans, combined with her essentially esoteric work, long kept Zambrano relatively unknown. When she finally returned to Spain in 1984, she received great honors and recognitions. However, they seemed to be more related to her Republican affiliation than with the originality and quality of her work.
Born on April 22, 1904, in Vélez-Málaga, Zambrano had a long academic career, and was affiliated with major universities in South and Central America and Europe, before her death in Madrid on February 6, 1991. Her work is characterised by the theoretical exploration of poetry's relation with epistemological epiphanies. She rejected philosophical rationalism and scientific reason and upheld the notion of “being-in-the world,” “dwelling,” letting things speak. She called that “the poetic reason.”
by Carmen Márquez Carrasco at 6:02 AM