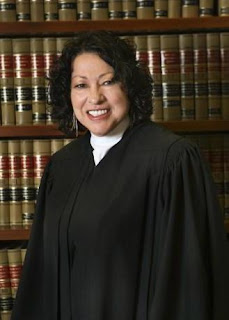 At 10 a.m. Eastern time tomorrow, the Senate Judiciary Committee will begin hearings on President Barack Obama's nomination of Sonia Sotomayor (right), since 1998 a Judge of the U.S. Court of Appeals for the Second Circuit, to succeed Justice David H. Souter on the U.S. Supreme Court. Herewith, a crib sheet:
► All IntLawGrrls' prior posts on Sotomayor are here; of particular interest may be her views on international law; judging and empathy; and legal realism and the Court.
Watch the hearing in person at Room 216, Hart Senate Office Building (good luck getting in). Webcast available here.
► A list of the Senators on the Committee -- for the Democrats, 2 women and 10 men, for the Republicans, 7 men -- is here.
► The list of witnesses scheduled for the hearing is here. A fraction of those on the list are women. For the American Bar Association, there'll be Kim Askew and Mary Boies. To be called by the Democrats: Temple Law Dean JoAnne A. Epps, on behalf of the National Association of Women Lawyers; Patricia Hynes, President of the New York City Bar Association; Ramona Romero, National President of the Hispanic National Bar Association; Yale Law Professor Kate Stith; and U.S. Rep. Nydia Velázquez (D-N.Y.), Chair of the Congressional Hispanic Caucus. To be called by the Republicans: Linda Chavez, President, Center for Equal Opportunity; Sandy Froman, past President, National Rifle Association; George Mason Law Professor Neomi Rao; and Dr. Charmaine Yoest, Americans United for Life.
How long will this confirmation process take? Predictions welcome.
by Diane Marie Amann at 6:01 AM