The United Nations Human Rights Council (photo below) approved Rashida Manjoo’s appointment as the new UN Special Rapporteur on Violence Against Women its Causes and Consequences on 18 June 2009, according to a UN press release. Manjoo (above, photo credit) is a leading gender rights, anti-apartheid, and social justice advocate. The Special Rapporteur’s mandate, established in 1994, and extended in 2003, is to investigate, and to make recommendations at international, regional, and national levels on ending, gender-based violence (GBV).
Often treated as a marginal issue by governments, GBV is a global phenomenon and impacts people at all levels of society. It occurs in 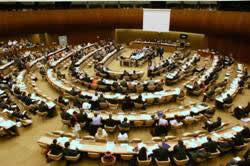 every country and culture and takes a range of forms, including the following:
►Family Violence: domestic violence/honor killings, female genital cutting, violently enforced appearance regulation, female infanticide, and abuses against girls, elders, and women with disabilities;
►Violence in the Community: rape, trafficking in women and girls, lack of access to reproductive health care, forced sterilization, the misuse of medical techniques to “control” women, and violence aimed at preventing the education of girls;
►State Violence and State-condoned Violence: GBV against women in detention, the use of rape, forced pregnancy, and other forms of sexual violence as weapons of war or armed conflict.
Groundbreaking international human rights instruments such as the Declaration on the Elimination of Violence Against Women and General Recommendation No. 19 (issued by the Committee on the Elimination of Discrimination Against Women) elaborate on the significant roles states and private actors must play in ending GBV.
Manjoo, an Advocate of the High Court of South Africa, served on that country’s constitutionally-prescribed Commission on Gender Equality from 2001 to 2006. She held research and teaching positions in international human rights law and advocacy and family law as a Clinical Instructor and Visiting Fellow at Harvard Law School’s Human Rights Program and as the E. Desmond Lee Visiting Professor for Global Awareness at Webster University. Manjoo writes and speaks extensively on women’s rights and other social justice issues.
A member of the international board of Women Living Under Muslim Laws, she is an internationally-recognized expert on the implications of cultural and religious context for gender rights and the socio-economic status of women and girls.
Rashida Manjoo is the third Special Rapporteur on Violence Against Women, following the appointments of Dr. Radhika Coomaraswamy (Sri Lanka) in 1994, and Dr. Yakin Ertürk (Turkey) in 2003.
IntLawGrrls look forward to a continued international spotlight on GBV and to the realization of a safer and more peaceful world for all.
by Hope Lewis at 1:25 PM

Congratulations to Rashida! This is a wonderful appointment all around.