Could it be that international criminal law, rather than promoting a stronger respect for human rights, instead echoes and repeats colonial forms of governance?

With regard to prosecution of wartime sexual violence, moreover, she asks:

Might it be the case that in making wartime sexual violence against women an issue of hyper-visibility, international criminal law and human rights are erasing and displacing other forms of violence and inequality?

Doris examines the categorization of rape as a weapon of war in her guest post below.
In addition to her scholarly activities, Doris serves on the Board of the Women’s Legal Education and Action Fund (prior post), chairing its Law Program Committee. She earned an B.A. from Carleton, an LL.B. from Dalhousie University, and an LL.M. from the University of British Columbia.
She dedicates her post to the memory of Eleanor Rathbone (below left), who served as an Independent Member of the British Parliament from 1929 until her sudden death in 1946. (photo credit) Born in Liverpool in 1872, Rathbone was a social reformer, proponent of women’s rights, advocate of family allowance, and the author of The disinherited family: A plea for direct provision for the costs of child maintenance through family allowances (2004).
Doris writes that she learned of Rathbone only recently, when her friend and colleague, Didi Herman, Professor of Law and Social Change at the University of Kent, mentioned Rathbone "in the context of a brief exchange about feminist mothers whose social justice politics too often failed to include racialized and other socially disenfranchised groups. Rathbone," Doris continues, "stands as an example of someone whose political convictions embraced women’s rights, socialist principles, a more just society, and a responsibility to all individuals, citizenship and membership notwithstanding." She concludes: "The truly exceptional politics and life contribution of Eleanor Rathbone is perhaps best teased out in the first three lines of Susan Pedersen’s brilliant book, Eleanor Rathbone and the Politics of Conscience (2004)":

Whatever Eleanor Rathbone’s constituents thought their Member of Parliament should be doing in early March of 1939, it probably wasn’t 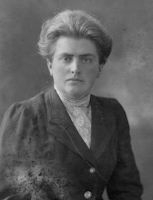 what she was doing – which was hiring a ship to run the blockade of Spain and bring Republicans threatened with reprisal to safety. Of course, she was doing other things as well – putting together a plan to expand schoolchildren’s access to free milk and meals, for example, and reviving her campaign for family allowances, which were beginning to look achievable as the prospect of war put the health of the population back on the political agenda. But in early 1939, with Franco’s troops poised for final victory in Spain, Czech Jews and social democrats fleeing the territories ceded to the Nazis by the Munich accords and Hitler poised for another eastward strike, international issues and the claims of refugees must take priority.

Today Rathbone joins IntLawGrrls other transnational foremothers in the list below our "visiting from ..." map at right.
Heartfelt welcome!