(My thanks to IntLawGrrls for this opportunity to guest post)

Hate crime is part of our history. Europe has been plagued by pogroms as much as by witch-hunting and other forms of prejudices; the United States has not escaped either this violence, nor have countries in Asia, Australasia and Africa.
Yet, the expression “hate crime” has only been recently coined. This development illustrates how 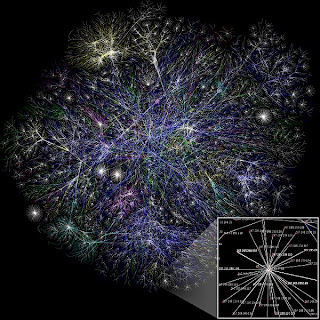 much perception of prejudice as a potent component of crime has changed during the last three decades. Hate is not any more a “fact of life”, but a harmful and unacceptable feeling to be criminalized.
Even though hatred is universal, hate crime legislation is not. As I detail in my forthcoming article, Hate Crime in Cyberspace: The Challenges of Substantive Criminal Law, this legislation varies from country to country, reflecting the needs and values of each society.
This diversity in national legislation would not matter so much if hate had not found a new medium to spread and reach others across the borders of nation-states. In cyberspace many media -- e-mails, chats, forums, billboards, websites, blogs -- are used to publish or distribute hateful messages, either to individuals or to groups. (credit for map of the Internet)
Hate crime on the Internet evokes hate speech. Yet, to assimilate one with the other would not do justice to the diversity of behaviours encompassed by the expression “hate crime”.
It is in that sense that a protocol that the Council of Europe adopted on 28 January 2003 -- the Additional Protocol to the Convention on Cybercrime, concerning the criminalisation of Acts of a racist and xenophobic nature committed through computer systems -- is misleading. Hate crime online, as offline, does not focus solely on race. It can target sexual orientation, disability, and, in some countries, like Turkey, social class. More importantly, hate crime is not limited to the dissemination of materials, to threats, insults and denial of the Holocaust; rather, it can encompass a variety of offences. These range from computer misuse (hacking and unauthorized acts impairing or with intent to impair the functioning of computers/networks), to fraud criminal damage (if the offence is not limited to tangible objects as in Britain), to harassment (which often starts online and spills to the physical world). With the emergence of virtual communities or virtual worlds, hatred finds new forms of expression.
Indeed, consider the online, virtual community of Second Life. The Front National, the French political party that defends racist and xenophobic ideas, has an office there. Second Life avatars thus can be subjected to hatred, and by this means the human player can suffer offence, even though the player's avatar may possess a different race, sexuality, religion, etc.
In such a context, how do we capture hate crime? What is to be done about criminal damage, even fraud (one example of new opportunities to defraud is here)?
These are developments that countries will have to tackle.

by Audrey Guinchard at 6:03 AM

"...one example of new opportunities to defraud is here."

MetaSecurity link does not work.