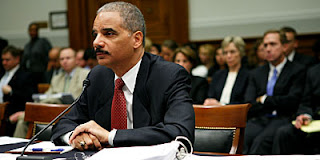 Several major news outlets reported this week that Attorney General Eric J. Holder, Jr. is considering appointing a special prosecutor to investigate the interrogation practices employed during the Bush Administration -- a move that would be contrary, perhaps, to President Barack Obama's entreaty to look forward, not backwards. (See especially the fascinating portrait of Holder's dilemma by Newsweek, the source of the Holder photo above right, as well as the Washington Post's coverage). It has been speculated that the move is at least partially motivated by the results of the CIA Inspector General report on torture that may or may not be released earlier than the promised August 31st. One name that has been floated for the position of Special Prosecutor is Assistant U.S. Attorney John Durham from Connecticut (short bio here), who, at the behest of former Attorney General Michael B. Mukasey, is already investigating the destruction of CIA tapes that depicted waterboarding and other interrogation tactics.

Holder's volte face, if he follows through on it, would do much to bring the United States back into compliance with the 1984 U.N. Convention Against Torture and Other Cruel, Inhuman or Degrading Treatment of Punishment, which the U.S. joined in 1994. That treaty at Article 4(1) obliges state parties to penalize "all acts of torture":


Each State Party shall ensure that all acts of torture are offences under its criminal law. The same shall apply to an attempt to commit torture and to an act by any person which constitutes complicity or participation in torture.

In addition, pursuant to Article 5(1), each state party is to "take such measures as may be necessary to establish its jurisdiction" over such acts when committed

there is reasonable ground to believe that an act of torture has been committed in any territory under its jurisdiction.

Article 13 requires that victims have an opportunity to raise claims of torture to competent authorities:

Each State Party shall ensure that any individual who alleges he has been subjected to torture in any territory under its jurisdiction has the right to complain to, and to have his case promptly and impartially examined by, its competent authorities. Steps shall be taken to ensure that the complainant and witnesses are protected against all ill-treatment or intimidation as a consequence of his complaint or any evidence given.

The obligations apply equally to the prohibition against cruel, inhuman and degrading treatment of punishent, a prohibition that is also set forth within the Torture Convention.
The United States implemented the Torture Convention in two ways: first, by enacting a penal statute (18 U.S.C. §2340) and second, by enacting a civil statute (28 U.S.C. §1350 note, the Torture Victim Protection Act). In addition, acts of torture and other forms of cruel treatment may be prosecuted as war crimes under 18 U.S.C. §2441. In addition to these international crimes, the Special Prosecutor could also bring garden variety criminal charges (battery) or recommend courts martial for members of the armed forces and others subject to military jurisdiction.

In terms of the international law charges:
► First: 18 U.S.C. §2340A authorizes prosecutions against U.S. nationals, but only for torture committed "outside the United States." Certainly places like Camp Delta at Guantánamo Bay and Bagram Air Base in Afghanistan are outside the territorial United States. The U.S. Supreme Court has twice ruled, however, that the U.S. Naval Base at Guantánamo is essentially within U.S. jurisdiction. (The first ruling in Rasul v. Bush (2004), extended statutory habeas rights to Guantánamo detainees. Once Congress amended the habeas statute, the Court in Boumediene v. Bush (2008), extended constitutional habeas rights to the same detainees on the recognition that the U.S. exercises "plenary control" over the naval base, even though de jure sovereignty still vests in Cuba. See here for prior blog posts on these rulings.) The question of whether detainees at Bagram Air Base, which number over 600, have habeas rights is currently the subject of litigation in Maqaleh v. Gates, 604 F. Supp. 2d 205 (D.D.C. 2009). For a discussion, see Kal Raustiala's excellent ASIL Insight. Bagram Air Base, located in an active theatre of war, exists pursuant to a lease similar to that governing GTMO, and the Obama Administration has resisted extending the Boumediene ruling to Afghanistan. This is complicated by the fact that in 2001, the USA Patriot Act of 2001 expanded the Special Maritime and Territorial Jurisdiction (SMTJ) of the United States to include the premises of United States military or other United States Government missions or entities in foreign States. So, bases outside the U.S. were no longer "outside the U.S." within the meaning of §2340. Detention centers not on bases might still have been. The expansion of the SMTJ had the unintended, it is claimed, effect of narrowing the reach of the §2340. This anomaly was corrected by the National Defense Authorization Act for Fiscal Year 2005 (NDAA05), which prospectively amended 18 U.S.C. §2340(3) to read as follows:

► Second: As an alternative to the torture statute, war crimes charges could potentially be brought under 18 U.S.C. §2441, the War Crimes Act of 1996, which applies to war crimes committed by U.S. nationals "inside or outside the United States". That statute lists torture, cruel treatment, inhuman treatment, mutilation, maiming, serious bodily injury, rape, sexual assault, and sexual abuse as war crimes. As discussed here, however, Congress, with the Military Commissions Act of 2006, amended the War Crimes Act in subtle yet significant ways that made it more difficult to prosecute abusive practices that fall short of torture.

► Finally, although the Attorney General can frame the mandate of the Special Prosecutor as narrowly as he likes -- even restricting him/her to investigate certain departments, etc. -- the Special Prosecutor can follow any leads relevant to the original mandate. This could result in a more wide-ranging investigation, especially given expansive notions of complicity liability. As a result, the special prosecutor’s investigation could implicate the architects of the detainee policy, including the lawyers who gave advice to the Bush Administration. Actual prosecutions would test arguments made in governmental memos about which types of conduct and interrogation methods constitute unlawful torture and other forms of prohibited cruel treatment. This has the potential to bring U.S. law into line with established jurisprudence from the international war crimes tribunals and human rights institutions, which have determined that many acts perpetrated upon detainees at Guantanamo and elsewhere constitute torture.

Even apart from criminal prosecutions, a full-scale investigation could produce information that would achieve some of the aims of the truth commission concept floated earlier this year by some Democrats.

(IntLawGrrls' various posts on these issues of accountability may be found here, here, and here.)

I can't believe how well intLawGrrls is pulling together the laws at issue in "the torture" question.

my sincere compliments (and gratitude).