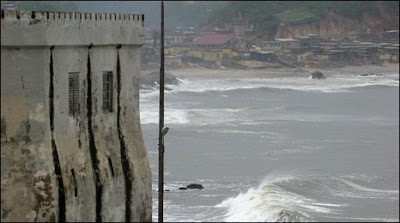 I could not let this day pass without noting U.S. President Barack H. Obama's visit to Ghana.
Described as the first visit by an African-American President to sub-Saharan Africa, there were only minor controversies. One involved the supposed North Africa vs. sub-Saharan African divide (Obama had visited Egypt since becoming U.S. President and many Africans do not recognize a socio-political division of the continent in this way). Another debate involved which country the President should visit first (his father is from Kenya, which Obama visited as a young man and as U.S. Senator; Nigeria was competitive as a large, politically and economically powerful state actor in West Africa). It seems the White House chose Ghana to signal support for its relative political and economic stability and democracy.
Obama spoke of hopeful prospects for greater agricultural and economic development and self-reliance in Africa despite the global economic crisis. Although often described as "poor," the region is extraordinarily rich in social, educational, and cultural traditions as well as agricultural, mineral, and biodiversity resources. At the same time, many countries in the region are beset by the ravages of a colonial legacy (including contemporary political corruption), the violence that accompanies the international trade in small arms, and the lack of well-maintained local healthcare and trade infrastructure.
Nevertheless. this enormously complex continent is filled with potential for its own peoples and for the world. Thousands throughout the continent celebrated the visit, and there was hope for the realization of plans to reorient thinking on African development. Such new approaches must involve a people-centered, sustainable, and self-directed development that meets the needs of local peoples first.
Perhaps no aspect of the Obama visit was more moving for African-American observers than the First Family's tour of Ghana's Cape Coast Castle, a 17th century dungeon in which thousands of African slaves were held in horrendous conditions prior to boarding slave ships (above, photo credit). A shaken Obama compared the impact of the visit to a previous stop at Buchenwald, the World War II Nazi slave labor and death camp, noting the human capacity for evil in every generation. He also spoke of the human capacity for resilience and for overcoming such evil. The latter is the hope of peoples all over the world; let's ensure that both U.S. and regional African policies help fulfill those dreams at home and abroad.
by Hope Lewis at 5:13 PM