In search of Miss McGeachy

The search started due to an offhand comment in the memoir of a mid-20th C. U.S. diplomat, respecting a then-much-talked-about report co-authored by Miss McGeachy at the British Embassy. A certain snark in the comment, coupled with its reference to a woman in the Foreign Office at that time, sparked curiosity.
No online biographical info on Mary Craig McGeachy (left) immediately available, the search required resort to books.
Most interesting was the entry at pp. 430-32 of Current Biography Yearbook 1944. That year, with the Allies still locked in global battle against the Axis Powers, McGeachy had been appointed Director of the Welfare Division of the United Nations' Relief and Rehabilitation Administration. She bore a dual responsibility: 1st, to assure that "'specially dependent groups such as the aged, children, and nursing and pregnant women'" received necessary aid as soon as Allied troops freed the territories in which they lived; and 2d, to rebuild the "'welfare organizations'" in those territories so that they could resume providing care, to displaced and returning persons, as soon as possible.
As would be expected, the unnamed author of the 1944 entry detailed McGeachy's background:
► Born in Ontario, Canada, she'd earned degrees in history and philosophy at the University of Toronto, and then studied at the Sorbonne in Paris and the Graduate School of Higher International Studies at the University of Geneva.
► In 1930 she'd joined the Permanent Secretariat of the League of Nations, working in its section on public health, social welfare, and economic studies, and serving as the League's liaison with British dominions and with women's groups.
► In 1940 she'd moved to Britain's Ministry of Economic Warfare, beginning in London, and then transferring to Washington, D.C.
► On October 1, 1942, she was appointed the 1st Secretary of the British Embassy in the United States, the 1st woman diplomat so to represent Britain (as the entry put it, the "first woman to receive an appoinment as a full-fledged British diplomat to a major power"). The only other woman said to have held even "a comparable post in the British diplomatic corps" had been Gertude Bell, in Iraq.
Clearly, at the time of her UNRRA appoinment, McGeachy was up to the task. Interesting, then, the extent to which the unnamed author focused on the fact that McGeachy was not a man.
Of McGeachy, who, it said, turned 40 in 1944, the entry made references to "the blond Canadian," "the young diplomat," and "'that competent young woman'" (twice, the 1st time quoting New York's Herald Tribune). And then there was this paragraph:

The young executive who will administer this great work is not only capable but attractive. A woman interviewer described her as 'disarming,' and a man wrote that she is 'remarkably pretty.' Her eyes are piquantly slanted under strong, arched brows, and her firm-jawed face has an expression of quite humor. Her skin is fair, as befits the copper-blond hair ...

It went on, praising her clothes, her cooking, and her hostessing, then ended with a wee mention that, as of December 1944, Miss McGeachy was married.
Little surprise that a recent profile reads rather differently.
Vol. 35, pp. 393-94 of the Oxford Dictionary of National Biography (2004), indicates without further comment that McGeachy -- birthday November 7 as stated in the 1944 entry -- was in fact born in 1901, and thus was a few years older than the author of that entry 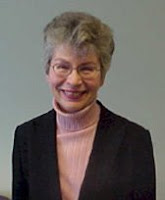 had thought. In this new profile, entry author Mary Kinnear (right) remarks not at all on appearances. Kinnear begins by giving McGeachy the worthy title "international civil servant," then reports that she continued as UNRRA's welfare director till the agency shut down in 1946. Thereafter McGeachy devoted her time to the International Council of Women. A nongovernmental organization founded in 1888 by suffragists like Susan B. Anthony and May Wright Sewall, the ICW now holds U.N. consultative status; McGeachy served as its President from 1963 to 1973. McGeachy endured a private life that, in Kinnear's words, "was not smooth," and died on November 2, 1991, in Keene, New Hampshire.
In her entry Kinnear -- a University of Manitoba historian and the author of Woman of the World: Mary McGeachy and International Cooperation, the 2004 biography depicted above left -- concludes:

McGeachy's life sheds light upon the contrasting twentieth-century conventions affecting men and women. ... At a time when married women were expected to retire from paid work she saw voluntary work as a way for women to serve society as citizens.

The life story of this pathbreaking diplomat is well worth contemplating in our new century.

(A very deep tip of the hat to Peg Durkin, Head of Public Services at the Mabie Law Library, the University of California, Davis, School of Law, whose research helped make this post possible.)