(Thanks to IntLawGrrls for giving me this opportunity to contribute this guest post and my transnational foremother dedication.)
The bill that would restrict universal jurisdiction in Spain, about which IntLawGrrls have posted here and here, constitutes an important setback in the Spanish contribution to the fight against impunity.
Why the setback?
A number of factors that have paved the way for the reform of Spanish legislation:
► The concerns of some about the ongoing dozen cases being investigated by Spain's Audiencia Nacional, cases through which it plays a role as, effectively, a universal court;
► Political pressure from states like China and Israel; and
► The path taken by the European Union to come to terms with the African Union, as reflected in the April 2009 AU-EU Expert Report on the Principle of Universal Jurisdiction -- about these regional organizations' respective understandings on the principle of universal jurisdiction.
This bill (text in English here) would move away from the “pure” universal jurisdiction allowed in Spain's current law, codified at Articles 23 and 24 of Ley Orgánica 6/1985, de 1 de julio, del Poder Judicial. As IntLawGrrl guest/alumna Pamela Merchant has noted, the proposed legislation has many flaws. By way of example, it would introduce:
► Extremely demanding conditions -- even a reverse interpretation of the principle of complementarity that is a cornerstone of the Statute of the International Criminal Court.
► Limitations on the exercise of universal jurisdiction that resemble a doctrine repudiated by Spain's highest court. The limitations resemble the doctrine that Spain's Tribunal Supremo advanced in 2003, in an appeal against the Audiencia Nacional decision in the Guatemala Genocide Case mentioned in Merchant's post. By an 8-7 vote Spain's supreme court maintained in 2003 that only cases with a “legitimating connection,” such as the nationality of the victim or the presence of the offender, could proceed; moreover, the connection was said to have to be present in the principal 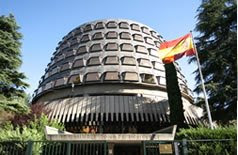 charges, not just in related or ancillary charges against the defendant. But a higher court in Spain, the Tribunal Constitucional, annulled that ruling two years later. The constitutional court (left) held that the physical presence of the suspect is not required to initiate an investigation based on universal jurisdiction. It also held that territorial courts and an international court have priority over Spanish courts exercising universal jurisdiction; however, universal jurisdiction could be exercised by Spanish courts if a party to the case submitted demonstrated that courts in the territorial state were unwilling or unable to investigate and prosecute effectively the crimes alleged in the complaint. Thus it established that the law did not require the showing of a link between the prosecution of a universal jurisdiction crime and Spain's national interest; indeed, the Tribunal Constitucional considered requirement of such a link to be "contrary to the spirit" of the principle of universal jurisdiction. (photo credit)
It is one thing is to limit abuse and subject the exercise of universal jurisdiction to reasonable limits, such as those envisaged in the Princeton Principles on Universal Jurisdiction (2001) or in some of the provisions of the Krakow Resolution on "universal criminal jurisdiction with regard to the crime of genocide, crimes against humanity and war crimes," adopted in 2005 by the Institut de Droit International. But it is very different thing to adopt limitations so far-reaching that the defeat the purpose of the principle of universal jurisdiction.
As Lloyd Axworthy, formerly Canada's Foreign Minister and now President and Vice Chancellor of the University of Winnipeg, put it in this 2006 essay:

The application of universal jurisdiction does not entail a diminution of state sovereignty but rather the enforcement of a collective and fundamental system of criminal justice.

by Carmen Márquez Carrasco at 6:04 AM