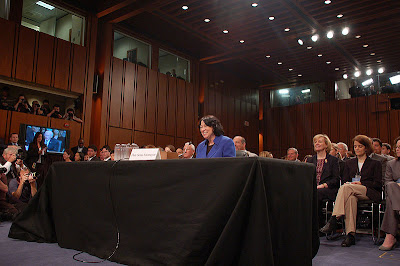 Still itching from that hairshirt Judge Sonia Sotomayor had on all last week.
No, not that hairshirt. The Mad Men overtones were so obvious -- lots of wise words and wisecracks swirling about the male-dominated dais, while all small-screen viewers could see that "Miss Olson" was among the brightest bulbs in the room -- that more comment of the sort seems hardly worth the effort. (EveryPundit apparently thought otherwise this weekend, though; see, e.g., here, here, and here.)
No, what gave this IntLawGrrl an urge to scratch was Sotomayor's international-and-foreign-law hairshirt.
Four days of hearings revealed a Capitol Hill consensus that before this nominee could win confirmation -- now expected the 1st week of August -- she was going to have to do penance for the presumed sins of her soon-to-be colleagues on the U.S. Supreme Court. (credit for hearing photo)
The Justices have sinned, it seems, by stating honestly that consultation of international or foreign legal norms had aided their decisionmaking. As I've written here, here, and here, every Justice on the Rehnquist Court -- including the oft-cited critics of the practice, William H. Rehnquist, Antonin Scalia, and Clarence Thomas -- did it now and again. No Justice ever claimed that a look at the reasoning of other learned judges had compelled her or his conclusion. Each made clear that although on occasion such reasoning might have persuasive power -- as might an article in a U.S. law journal or the opinion of judges sitting in 1 of the 50 states -- it never binds the Court to arrive at a particular result. For a long time consultation was unobjectionable; indeed, unobjected-to. But after Justices used this methodology in the course of reversing 3 Rehnquist-era precedents respecting same-sex sodomy and capital punishment of children and mentally retarded persons, some, including some Republicans in Congress, called for judicial impeachments (pp.1571, 1579).
Thus a Democratic Senator, Charles Schumer (below left) of New York, was tasked on Day 2 of the hearings to inoculate Sotomayor against international-law infection:

SEN. SCHUMER: ... Just so the record's a hundred percent clear, what do you believe is the appropriate role of any of foreign law in the U.S. courts?

JUDGE SOTOMAYOR: American law does not permit the use of foreign law or international law to interpret the Constitution. That's a given, and my speech explained that .... There is no debate on that question. There's no issue about that question.
The question is a different one because there are situations in which American law tells you to look at international or foreign law, and my speech was talking to the audience about that. And in fact I pointed out that there are some situations in which courts are commanded by American law to look at what others are doing. So, for example, if the U.S. is a party to a treaty, and there's a question of what the treaty means, then courts routinely look at how other courts of parties who are signators are interpreting that. There are some U.S. laws that say you have to look at foreign law to determine the issue. So, for example, if two parties have signed a contract in another country that's going to be done in that other country, then American law would say you may have to look at that foreign law to determine the contract issue. ...

SEN. SCHUMER: Right. And you've never relied on a foreign court to interpret U.S. law, nor would you.
JUDGE SOTOMAYOR: In fact, I know that in my 17 years on the bench, other than applying it in treaty interpretation or conflicts-of-law situations, that I have not cited to foreign law.

That did not satisfy other Senators, however. Among those returning to the issue on Day 3 was Sen. Jeff Sessions (R-Ala.) and Sen. Tom Coburn (R-Texas) (below right); the latter elicited this colloquy:

SEN. COBURN: So there—you stand by the—there is no authority for a Supreme Court justice to utilize foreign law in terms of making decisions, based on the Constitution or statutes?
JUDGE SOTOMAYOR: Unless the statute requires you or directs you to look at foreign law—and some do, by the way—the answer is, no, foreign law cannot be used as a holding or a precedent, or to bind or to influence the outcome of a legal decision interpreting the Constitution or American law that doesn't direct you to that law.

Sotomayor then drew a verbal distinction:

JUDGE SOTOMAYOR: [T]here's a public misunderstanding of the word "use" in what I was talking about. One doesn't use those things in the sense of coming to a legal conclusion in a case.
What judges do—and I cited Justice Ginsburg—is educate themselves. They build up a story of knowledge about legal thinking, about approaches that one might consider. But that's just thinking. It's an academic discussion when you're talking about
thinking about ideas than it is how people think about the citation of foreign law in a decision. They assume that a—if—if there's a citation to foreign law, that's driving the conclusion. In my experience, when I've seen other judges cite to foreign law, they're not using it to drive the conclusion. They're using just to point something out about a comparison between American law or foreign law. But they're not using it in the sense of compelling a result.

On Day 4, Coburn pressed for Sotomayor to "affirm" on the issue, and she complied:

Feeling itchy?
The distinction confounds -- "use" doesn't mean a conclusion's compelled, but "interpret" does? Yet it was totally in keeping with the penance apparently expected of this nominee, by Senators on both sides of the aisle, by those who prepared Sotomayor for the hearings, and by the judge herself.
What's next? 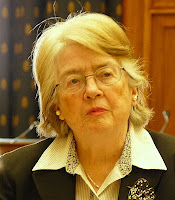 Consider the answer of another woman who's served on the federal bench -- Patricia M. Wald (left) (photo credit), once the Chief Judge of the U.S. Court of Appeals for the District of Columbia Circuit and later a Judge on the International Criminal Tribunal for the former Yugoslavia. In "Questions Sotomayor Still Must Address," a Washington Post op-ed that dealt with a number of issues, Wald wrote this on the question of foreign and international law:

[A] less timid defense of looking at how other countries deal with similar legal problems in a globally dependent world might be in order. We openly extol our institutions and legal theories to the rest of the world; why should we not be open to looking at theirs? ...

Sotomayor did a superb job in maneuvering a smooth course toward a deserved seat on the Supreme Court, but, hopefully, she and others will think about some of these enduring problems in the judicial system after they get there.