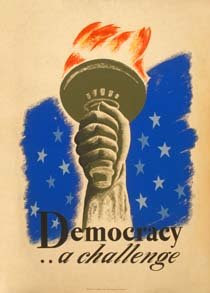 By now many will have read that on this Independence Day Liberty's crown reopens to tourists willing to walk the 168 steps to the top of the 125-year-old Statue about which we've posted. It's the 1st day since September 11, 2001, that visitors will be permitted in this part of the statue.
But few may know that there's another off-limits part of the statue. It's the torch -- it too was closed on account of a terrorist act, and long before 9/11.
On the night of July 30, 1916, land in and around New York's harbor was rocked by "massive explosions, in quick succession." The devastation is evident in photos available here. What came to be known as the Black Tom blasts could be felt in Philadelphia 90 miles away, and shattered nearly all windows in Manhattan and New Jersey. The island on which Liberty stands was shaken, and her torch closed. (credit for Works Progress Administration poster)
There're 2 international law twists to this story:
► The bombing, which occurred as war raged in Europe, was attributed to agents of Imperial Germany. But by the time the American-German Mixed Claims Commission formed after World War I found Germany liable for $21 million plus interest, Hitler-led Germany refused to pay. (p. 500)
► Following the end of World War II, one German on whom suspicion for the Black Tom disaster had settled, Franz von Papen, was charged based on other conduct with crimes against peace and tried before the International Military Trial at Nuremberg, which acquitted him in the Trial of the Major War Criminals.
And the closed-off part of the statue? Later replaced and now on museum display, Liberty's original torch never reopened.
by Diane Marie Amann at 6:01 AM