(Thanks to IntLawGrrls for inviting me to guest post on the issue of terrorism-related detention. I am a regular reader and fan of the blog so am delighted to be here!)
President Barack Obama hasn’t yet announced the details of his plans to revamp post-September 11 counterterrorism policy. But preliminary indications are that the final plan will be both retrospective and prospective:
► Retrospective in that it would close and try to resolve many of the problems associated with the facility at Guantánamo Bay.
► Prospective in that it may anticipate detaining administratively persons captured in the future — irrespective of whether they are captured on or off a traditional battlefield. (Obama seemed to be backing away this week from his earlier statement favoring "prolonged detention.")
The retrospective, Guantánamo-related aspects have been addressed at length.
I want to focus here on the prospective aspect, asking: 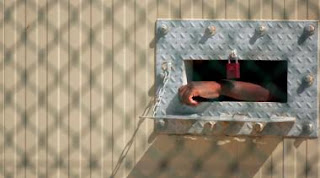 Those who answer that question in the affirmative usually focus on the armed-conflict nature of our fight. They assert that we are at war with Islamist terrorist groups, and so may detain their members under humanitarian law, the law that governs armed conflicts. That doesn’t quite resolve the question, for a number of reasons:
► First, though we are engaged in an armed conflict in some parts of the world, it’s questionable to assert that we are engaged in a global armed conflict such that humanitarian law governs our counterterrorism measures worldwide. (This is one reason the Bush Administration’s “Global War on Terror” rhetoric was so divisive.) If we are not engaged in a global armed conflict, then humanitarian law cannot justify terrorism-related detentions outside “hot zones” of conflict. Many of the “high-value” detainees captured during the administration of President George W. Bush were not captured in traditional war zones. That’s likely to be the case in the future, as well.
► Second and more important, even if humanitarian law governs all terrorism-related detentions, it does not answer the question posed above. The humanitarian legal rules for this sort of conflict are silent with respect to detention. They assume that noncriminal detention is permissible, but do not establish any procedural or substantive constraints. The dominant modern position is that human rights law fills those gaps.
The question, then, is whether human rights law permits noncriminal, security-based detention.
Many human rights lawyers assert that it does not; human rights law requires terrorism suspects to be criminally prosecuted or released.
I disagree.
As I have detailed in my recent article, International Standards for Detaining Terrorism Suspects: Moving Beyond the Armed Conflict-Criminal Divide, most human rights instruments establish procedural constraints on detention and a substantive requirement of non-arbitrariness. (The European Convention on Human Rights is notably distinct.) International actors broadly accept that security-based administrative detention is sometimes non-arbitrary, or lawful. But they have failed to articulate when that’s the case. This leaves room for interpretation. Interpreting human rights law to permit noncriminal, security-based detention is an aggressive but legally sustainable approach.
Is it a good idea?
In my view, that depends on the alternatives. They are not appealing:
► I have already alluded to one alternative — that states will assert that humanitarian law governs without the benefit of human rights law. This usually means detention without procedural or substantive constraint. That was the Bush Administration’s approach before the U.S. Supreme Court redirected it.
► A second alternative is that states will outsource their dirty work to other states. Or deport terrorism suspects despite the risk of mistreatment. Or kill suspects instead of trying to capture them.
Western liberal democracies — which face a real threat from terrorism but also are committed to human rights — have employed all of those tactics.
They have also been experimenting with security-based administrative detention. In Europe and Canada, these experiments have hooked into criminal or immigration proceedings. Terrorism suspects are detained on the (often disingenuous) supposition that the suspect will soon be criminally charged or deported. Those experiments have sometimes been flawed. But because pursued openly and with legislative and judicial participation, they indicate that states are groping for a new legal framework for detaining terrorism suspects. Refining human rights law to provide that framework would serve two functions:
► It would enable states to detain based on a lawful template that satisfies their security needs; and
► It would reduce the appeal of other, uncontrolled measures that undermine human rights.
It is, at the very least, an option worth considering.
by Monica Hakimi at 6:01 AM