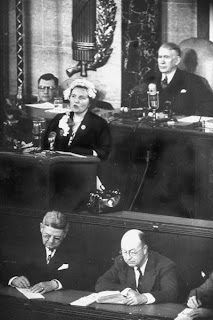 'We have never before been so keenly aware that in this world of ours we need cooperation as intimate as that among the cells of one body.'

-- Queen Juliana of the Netherlands, in an April 3, 1952, speech before Congress (right), as quoted in ch. 66 of Present at the Creation (1st ed. 1969), the memoir of Dean Acheson, former U.S. Secretary of State (prior post). The Dutch monarch was the 2d woman to address a joint session of Congress. (credit for Life magazine photo) The 1st had been her mother, Queen Wilhelmina, in 1942. Juliana's statement serves to remind that neither global interdependence, nor globalization, is a new phenomenon. Nor, indeed, resistance to same. For Juliana's speech fell short of its intended purpose, to persuade a protectionist Congress to aid Europe's postwar reconstruction by easing U.S. restrictions on international trade. As Acheson put it:

[H]er words did not soften opposition to imports of Dutch cheese.