On this day in ...
... 1934 (75 years ago today), the United States' Roman Catholic bishops formed the Legion of Decency a lobbying group that issued ratings on movies. Films were categorized as "Class A: unobjectionable," "Class B: objectionable," or "Class C: condemned." An "objectionable" label would result if the film entailed suggestive dialogue, lack of moral compensation, lustful kissing, or acceptance of divorce. The lobby proved powerful, as film studios either pulled or altered projects in order to win the Legion's approval. For example, the plot of Belle of the Nineties (1934) was changed so that the lead actor, Mae West, was married by the end of the film. (image credit) Hollywood soon adjusted, adopting a more subtle but equally suggestive approach to “indecency.”
... 1994 (15 years ago today), Yasser Arafat (below left), Palestinian Liberation Organization chairman, returned to the Gaza Strip after 27 years in exile. Before boarding a helicopter from Cairo with Egyptian President Hosni Mubarak, Arafat said: "Now I am returning to the first free Palestinian lands. You have to imagine how it is moving my heart, my feelings." His return 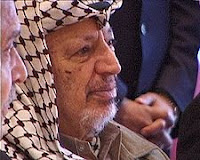 followed the 1994 Israel-PLO pact known as the Cairo Agreement, which created self-rule for Palestinians in Gaza and Jericho in the West Bank. Arafat went on to become the elected president of the Palestinian National Authority in 1996. He would remain a symbolic figurehead for many years even after he lost prominence, and huge crowds would turn out for his funeral in November 2004.

(Prior July 1 posts are here and here. And a hat tip today to Rachel Prandini, 3L at the University of California, Davis, School of Law, for drafting these items!)
by Diane Marie Amann at 5:59 AM